The Night Before and Secret in Their Eyes

Seth Rogen celebrates a bro-com Christmas, Chiwetel Ejiofor stalks a killer from out of the past. 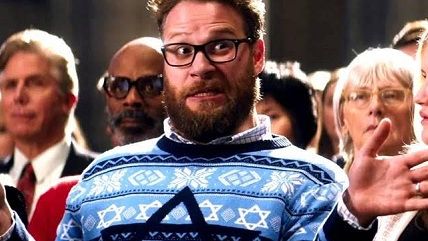 The Night Before is an anti-Christmas comedy that nevertheless collapses in a puddle of seasonal goo at the end. The stars are Joseph Gordon-Levitt, Seth Rogen and Anthony Mackie, so there are laughs to be had, and moments of real warmth. But the movie's tone is uncertain, its story strained, and its general effect surprisingly unpleasant.

Gordon-Levitt plays Ethan, a failed musician whose parents died 13 years ago. Ever since then, he and his longtime buds Isaac (Rogen) and Chris (Mackie at his most winning) have gathered each Christmas Eve for a night of wild partying all around Manhattan, occasions intended to stave off Ethan's annual blues. But the three friends are in their early thirties now, and Ethan's pals are ready to move on: Chris is a late-blooming pro-football star with a Red Bull endorsement deal and Isaac a prosperous lawyer with a baby on the way. This will be their last Yuletide revel.

The movie's bro-centric concept—a raunchy frolic in which each of the characters learns a little lesson along the way—feels dated. But the stars are game, and they play it as if it were still fresh. We see them dancing along the mock piano keyboard at FAO Schwarz (where Tom Hanks once cavorted in Big), and wheeling around town in a humongous Red Bull limousine (a tribute to the gods of product placement). Isaac's pregnant wife (Jillian Bell) has, strangely, provided him with a box of party drugs for the big blowout (enabling Rogen to reprise his familiar stoned-to-the gills routine). And when the pot runs out, the boys call in their old high-school weed dealer, Mr. Green (a wonderfully deadpan Michael Shannon–"You're all my children," he says, gazing upon his now-grown former clients).

As the story rattles along—with the stars making their way toward an ultra-exclusive holiday party called the Nutcracker Ball—we see that Ethan is still pining for the sensible girlfriend (Lizzy Caplan) who recently dumped him, and we learn that Chris has a shameful secret. We also meet an amusingly whacked-out Christmas guerilla (Ilana Glazer) whose mission is to extinguish all expressions of holiday cheer. Inevitably, Rogen pal James Franco turns up for a party cameo. And Miley Cyrus puts in an appearance, too, doing a good-natured duet with Ethan on a rendition of her two-year-old hit, "Wrecking Ball." (Cyrus' record company and the studio releasing this movie are both owned by Sony.)

Despite a sweet interlude featuring Chris and his doting mom (a lovable Lorraine Toussaint), the picture is irreparably soured by a couple of misconceived scenes. In one of them, the wasted Isaac delivers a nasty rant directed at his unborn child; in another, attired in a Star of David Christmas sweater, he disrupts a midnight Mass in a Catholic church by puking in the aisle and shouting "We didn't kill Jesus!" These scenes are jarringly off, and the movie never quite recovers from them—despite trying very, very hard to do so at the end.

Secret in Their Eyes

Secret in Their Eyes is a somber crime drama with a fine cast, but the movie never really gels, and its big shock-twist ending is so out-of-the-blue that it prompted scattered laughter at the screening I attended. The lead actors—Chiwetel Ejiofor, Julia Roberts, and Nicole Kidman—are good in such different ways that they sometimes seem to be working in separate pictures. And while writer-director Billy Ray (Shattered Glass) has done a solid job adapting a 2009 Argentine film (which won a Best Foreign Language Film Oscar), the story's overly tricky time-shift structure leaks more and more tension the longer it goes on.

It begins in 2002, in the aftermath of the 9/11 attack on New York. Los Angeles authorities fear that their city will be the next to be hit, and they're keeping a close watch on local Muslims. While surveilling a mosque one day, FBI agent Ray Kasten (Ejiofor) discovers a body in a nearby Dumpster—a dead woman who turns out to be the daughter of his fellow anti-terrorism investigator, Jess Cobb (Roberts). Kasten comes to believe he can nail a man named Marzin (Joe Cole) for the killing, but this low-life turns out to be a key undercover informant for the district attorney (Alfred Molina), who won't allow his operative to be compromised for any reason, even murder. An assistant DA named Claire Sloan (Kidman, elegantly blonde) is sympathetic, but when Kasten can't make an iron-clad case against Marzin, she turns away.

Thirteen years later, Kasten, now working in private security, returns to LA to continue the investigation, with which he's become obsessed. Claire has become the district attorney, and Jess, haunted and haggard, has moved to a remote house to nurse her still-ravaged heart. (Roberts plays her age here, and then some: Kasten tells Jess, "You look a million years old.") Recruiting another former partner, Bumpy Willis (Dean Norris, of Breaking Bad), Kasten resumes his pursuit of Marzin, whose whereabouts are now unknown. Although not for long.

The movie's constant flipping back and forth between Then and Now is confusing (our only aid in keeping track is the latter-day gray in Kasten's hair). Ejiofor is a master of layered emotions, and he and Roberts have one standout scene together, in which Jess crumples in tears over the body of her dead daughter. But although Kasten and Claire are supposed to have spent years romantically longing for one another, there's no heat to this unconsummated relationship; we don't buy it, and we wonder why it's been stirred into the story. (Kasten's deepest connection is with Jess.)

Director Ray and his cinematographer, Daniel Moder, have given the picture an appropriately muted and mournful look. If only the endless time-tripping had been dialed down, too.