'The Gullible Man's Shortcut to a Nuclear Bomb'

The legend of red mercury 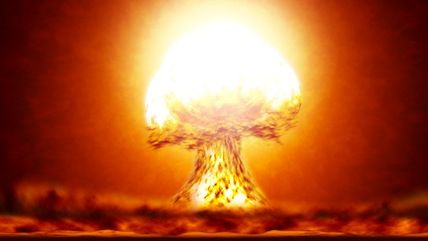 C.J. Chivers has an engrossing article in The New York Times Magazine about red mercury, a fictional weapon that many people believe is real and some have died trying to acquire. Chivers calls it "the gullible man's shortcut to a nuclear bomb."

To approach the subject of red mercury is to journey into a comic-book universe, a zone where the stubborn facts of science give way to unverifiable claims, fantasy and outright magic, and where villains pursuing the dark promise of a mysterious weapon could be rushing headlong to the end of the world. This is all the more remarkable given the broad agreement among nonproliferation specialists that red mercury, at least as a chemical compound with explosive pop, does not exist.

Legends of red mercury's powers began circulating by late in the Cold War. But their breakout period came after the Soviet Union's demise, when disarray and penury settled over the Kremlin's arms programs. As declining security fueled worries of illicit trafficking, red mercury embedded itself in the lexicon of the freewheeling black-market arms bazaar. Aided by credulous news reports, it became an arms trafficker's marvelous elixir, a substance that could do almost anything a shady client might need: guide missiles, shield objects from radar, equip a rogue underdog state or terrorist group with weapons rivaling those of a superpower. It was priced accordingly, at hundreds of thousands of dollars a kilogram. With time, the asking price would soar.

The whole piece is worth your time; you should head over to the NYT site and read it. I'll quote just one more passage here—one where the legend of red mercury is found fusing itself to some older sorts of folklore:

Safi al-Safi, an unaffiliated rebel and small-time smuggler specializing in weapons, antiquities and forged documents, sat in an open-air cafe beside the Syrian-Turkish border. He was smoking scented tobacco from a water pipe while discussing the cross-border mercury trade. "Red mercury has a red color, and there is mercury that has the color of dark blood," he said. "And there is green mercury, which is used for sexual enhancement, and silver mercury is used for medical purposes. The most expensive type is called Blood of the Slaves, which is the darkest type. Magicians use it to summon jinni."