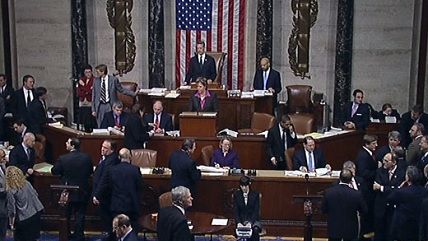 The House of Representative passed, by a vote of 289-137, the American Safety Against Foreign Enemies (SAFE) Act. Nearly 50 Democrats joined Republicans in supporting the bill despite lobbying by the Obama administration described as "too in the weeds" for a "toxic" issue.

The SAFE Act requires refugees from Iraq or Syria, or who had been there at any point since March 1, 2011, to undergo a "thorough background investigation" from the FBI and be certified by the Secretary of Homeland Security (DHS), the FBI director, and the director of national intelligence as "not a threat to the security of the United States," before being admitted into the country. It also requires the DHS to report monthly on how many covered aliens are certified, as well as a risk assessment conducted by the DHS Inspector General on the certifications granted.

"If you look at the bill, it's hard to see how it's as awful as the administration is portraying it as," Rep. Scott Peters (D-Calif.) told Politico.

Two Republicans voted against the bill, Walter Jones (NC), who has called to defund the "Middle Eastern refugee resettlement program" in the next government spending bill, and Steve King (IA). Senate Minority Leader Harry Reid, meanwhile, pledged to keep the House bill from reaching President Obama's desk. He said in a press conference he had not "read the House language." The entire bill is less than 600 words long, with fewer than 400 words that could be construed as the "language." Democrats may insist they want the U.S. to accept Syrian refugees, defaulting to partisanship suggests otherwise.

There are just 44 Democrats in the Senate, with sixty votes generally enough to get a bill through the Senate. The presumptive Democratic leader after Reid retires, Chuck Schumer (NY), has said a "pause" in the resettlement of Syrian refugees may be necessary, echoing comments made by Senate Majority Leader Mitch McConnell (KY).

The bill does not cover refugees from other countries with active ISIS and Al-Qaeda affiliates, although if it's considered by the Senate, there will almost certainly be attempts to amend it. The White House threatened to veto it as early as yesterday, before its passage by the House, calling the requirements in it "unnecessary and impractical" but not explaining why.