GOP candidates offer solutions that are redundant, meaningless, or reckless. 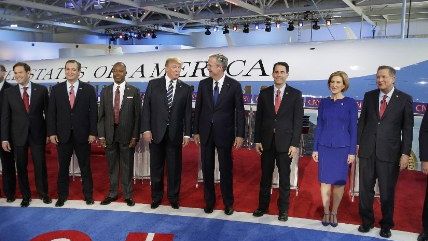 Adversity, it's been said, doesn't build character; it reveals it. The terrorist attacks in Paris managed to expose a lot about the character and wisdom of several Republican candidates for president, and the discoveries are not reassuring.

The entire field is united in condemning Barack Obama's handling of the war against the Islamic State, also known as ISIS. The candidates' ideas on how to do it better, however, fall into three categories: redundant, meaningless and reckless.

She is probably the last person to realize we are already at war with the Islamic State. Over the past 15 months, the U.S. military has carried out more than 6,300 airstrikes, which it says have killed upward of 10,000 enemy fighters.

Fiorina also insists she would provide arms to the Kurdish forces fighting the Islamic State, as well as to the government of Jordan. But the U.S. already supplies weapons to the Kurds, though it routes them through the Baghdad government.

The administration announced in September it would increase military aid to Jordan and provide weapons more advanced than in the past. As for Egypt, a National Security Council spokesperson told me the U.S. has provided intelligence analysis on the October airline bombing, among other matters.

Donald Trump said he would "bomb the (bleep) out of them," with a focus on the enemy's oil infrastructure. He missed the story in The New York Times the day before the Paris attacks that reported, "The United States and its allies have sharply increased their airstrikes against the sprawling oil fields that the Islamic State controls in eastern Syria in an effort to disrupt one of the terrorist group's main sources of revenue, American officials said this week."

Ted Cruz has the notion that you win wars with words. He says we are handicapped by "a commander in chief unwilling even to utter the words 'radical Islamic terrorism.'" To Islamic State fighters who worry about being vaporized by Hellfire missiles, Obama's preference for terms like "violent extremists" is cold comfort.

The president, like Hillary Clinton, avoids Cruz's favored nomenclature in deference to our Muslim allies.

"You certainly do not want to describe the threat in terms of a war on Islam," Juan Carlos Zarate, an adviser to President George W. Bush on terrorism, has said. "We struggled mightily about how you describe the ideology."

Cruz believes that to stop an enemy that slaughters innocent people, we have to slaughter innocent people. The Islamic State, he said, "will not be deterred by targeted airstrikes with zero tolerance for civilian casualties."

It will cheer him up to learn that Canada's CBC News found "credible allegations" that up to 600 civilians have died in the U.S. air campaign. It doesn't occur to Cruz that each innocent person blown up by an American bomb produces more people eager to slaughter Americans.

Trump, Ben Carson, Jeb Bush and John Kasich have indicated a willingness to use ground troops, but none proposes the sort of numbers deployed in Afghanistan (which peaked at around 100,000) and Iraq (166,000). The candidates don't acknowledge that a small force might be inadequate. Then what? Go big or go home?

Marco Rubio took a novel tack, criticizing Cruz and Rand Paul for supporting the USA Freedom Act, which curbed the National Security Agency's collection of Americans' phone records. He charged that this "weakening of our intelligence gathering capabilities leaves America vulnerable." But a federal court and a presidential review commission found no evidence the program prevented a single attack.

Rubio may not realize we are far likelier to get information on the Islamic State from a separate NSA program, which involves listening to the phone calls and reading the emails of foreigners abroad suspected of terrorist activities—a program the USA Freedom Act left alone.

Maybe Obama is already deploying all the resources they don't know about. That's information Carson wouldn't have. But in this group, lack of knowledge is no hindrance.