And then there were ... still too many. 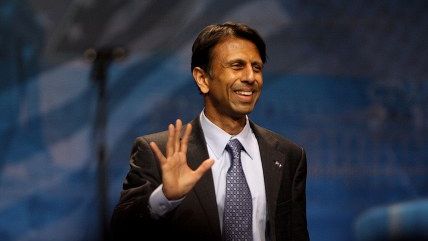 After failing to make any sort of impact in the race for the Republican nomination for president, Louisiana Gov. Bobby Jindal announced this afternoon that he is dropping out. He let the world know via Fox News:

When asked by Baier why his candidacy didn't take off, Jindal said his campaign spent "a lot of time" developing policy papers, but "clearly there wasn't a lot of interest" in those papers.

The 44-year-old governor told Baier he is not endorsing another candidate right now, but will support the eventual Republican presidential nominee.

"At the end of the day I trust the American people to select our nominee for the next president," he said Tuesday. "I want someone who's got the smarts to make big changes."

Jindal never made an impression that there was anything special about him to make him stand out above the other candidates. At his last debate appearance, his stock answer to just about every single question was to cut government spending, no matter what the question was about. It's certainly an agreeable sentiment, but in the absence of Sen. Lindsey Graham answering every single question by warning everybody about ISIS coming to kill us all, he simply sounded repetitive. He pointed out that he was the only governor among the Republican candidates that actually reduced state spending during his administration, but it didn't seem to get him anywhere. This isn't an election about reducing government spending, at least not this point in the cycle. More's the pity.