Kung Fu Meets the Apocalypse in Into the Badlands

At least there's no zombies in this one. 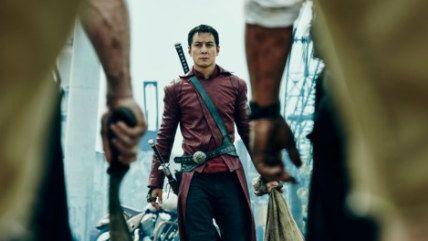 In a move I'm sure will be studied in business schools for centuries to come, AMC has carved an indisputable marketing niche as The Official Network of the Post-Apocalypse. AMC already airs two shows in which brain-eating zombies roam the shambles of a ruined America, plus a Web series about zombies taking over commercial airlines (which, I'm sure, Bernie Sanders predicted in the wake of deregulation).

And now comes Into the Badlands, set in a post-apocalyptic world of wretched serfs governed by kung-fu warlords. The show was prompted, no doubt, by persistent fan demand for the desiccated corpse of Bruce Lee to claw its way out of the grave to kick ass and take names in an episode of The Walking Dead.

The apocalypse that set the stage for Into the Badlands was a series of world wars that mostly obliterated civilization. What has emerged since then in the territory known as the Badlands is a feudal society governed by seven rival barons, whose lusts for one another's blood and power are barely held in check by the economic interdependence of their oil and opium empires.

They maintain their rule with armies of martial-arts assassins known as clippers, who kill for both money and sport. (Instead of putting notches in gun stocks to count their victims, they get tattoos.) "This world is built on blood," muses Sunny (Daniel Wu, star of many a Hong Kong chop-socky adventure), the most ferocious—as well as the most introspective—of all clippers. "Nobody is innocent here."

Sunny is the chief lieutenant of Quinn (Marton Csokas, The Lord of the Rings films). Once the most feared of the barons, Quinn's power is now eroded by illness, an ambitious but inept son, and the attentions of a lissome young trophy wife. A new baron, The Widow (British TV actress Emily Beecham), whose wardrobe puts a literal spin on the phrase "killer shoes," is poised to strike at Quinn.

Into this melange of homicidal ambitions wanders a teenage refugee named M.K. (Aramis Knight, General Hospital), the mysterious object of a kidnapping attempt by The Widow. Sunny thwarts it, mostly on the basis of what seems to be the foundational principle of the Badlands, that anything anybody values should be stolen from them immediately. But he soon realizes that M.K. holds some dangerous secrets, including some that may relate to a wispy myth of a less barbarous territory somewhere outside the Badlands.

Into the Badlands is a pastiche of stylistic (and stylish) theft from everything from The Matrix to Mad Max. Even more audaciously, it claims to be based on Journey to the West, an epic Ming dynasty novel about a Buddhist monk's pilgrimage to India that's considered one of the building blocks of Chinese literature.

But for all its cinematic and literary allusions, the show's kung-fu heart is never far from its sleeve. Every episode contains several intricate—and grisly—martial-arts set pieces that look like something Busby Berkeley might have staged if he'd had Hannibal Lecter as an assistant director. Into the Badlands' fights are mesmerizing, but after a while, I found myself longingly recalling the scene in Raiders of the Lost Ark in which Indiana Jones is confronted by a sword-twirling ninja—and, with a look of annoyance, whips out a gun and shoots him.

My reaction suggests the larger conundrum of Into the Badlands: The world is largely divided into two camps—those who love martial-arts movies, and those who think the first camp should be collectively blinded and disemboweled. So your reaction to Into the Badlands may ultimately turn on your relative affection for nunchucks and bo staffs rather than its premise (daffy), its plotting (surprisingly interesting), its photography (grand) or its acting (generally good).

I'm basically part of the group that wishes Bruce Lee and David Carradine had been drowned at birth. Still, I can't help but feel a certain scruffy affection for a show in which the hero is learning to read by perusing Paradise Lost and where the political economy is summed up in a single line of dialogue: "Power is not inherited…It's taken." Take that, Frank Capra.