Why should mediocre candidates get the benefit of forced balloting? 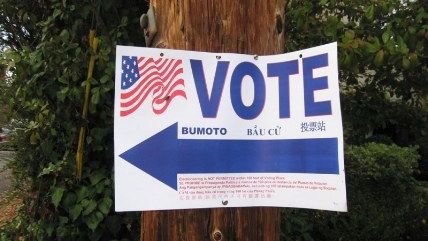 I must confess at the start to be somewhat baffled by nearly every argument and claim presented in Nicholas Stephanopoulus' piece at The Atlantic, "A Feasible Roadmap to Compulsory Voting."

The very first sentence is based on a host of unsupported assumptions about democracy and representation: "Not enough people vote." This is simply an assertion. It's a very popular assertion, no doubt, and there are certainly many people who feel this way. I don't want to act as though Stephanopoulus is inventing a concern out of the blue. But it's nevertheless non-factual.

Beyond that opening, I think what I'm most baffled about is that Stephanopoulus spends several hundred words explaining how mandatory voting could be implemented in America in phases based on this assumption that we need more people voting, and yet at no point does this piece ever engage in why people who are registered to vote sometimes don't vote. Here's the opening just to show how actually disengaged the piece is in truly exploring voting:

Not enough people vote. It's a perennial source of concern in American politics. There's no shortage of reforms designed to address the problem, but one idea that seems particularly promising, at least in theory, is compulsory voting. It would produce much higher turnout for the obvious reason that it requires people to vote. It's long been dismissed, though, as an impossible pipe dream, unlikely to ever happen in the United States. But if reformers were to start at the municipal level, they could set into motion forces that might lead to its nationwide adoption.

Start with some statistics: In years with presidential elections, voter turnout peaks at just above 60 percent. In off-year elections, turnout dips to 40 percent or less. In November 2014, only 36 percent of eligible voters went to the polls—the lowest share in more than 70 years. Participation this paltry calls into question the political system's legitimacy. It also hints that election outcomes might be quite different if more people bothered to show up.

So he raises the issue that low turnout threatens the legitimacy of elections, no doubt meaning that the winners of these races didn't really garner significant support from the constituency. But his solution is the government forcing citizens to cast ballots. How does this add legitimacy to the outcome? If the outcome of elections would be "different" if more people turned out to vote, but they don't, then why should the election outcomes be different? Why should lackluster candidates who fail to capture the interest of voters be "legitimized" by compulsory voting?

That's what galls me most about these arguments—the assumption that the purpose of voting is to serve the needs of the political class to determine a "winner." Legitimacy, according to Stephanopoulus, is just mathematics, not an evaluation of the passions or causes that brought out huge voters for the Democratic Party in 2008 that had disappeared by 2014. What could have possibly happened between that time period to make people stop caring enough to vote? Maybe that's the threat to "legitimacy," perhaps?

Anyway, I've ranted angrily about the insulting nature (and civil rights violations) of trying to force American citizens to vote here, and how it favors mediocrity in candidates. As an aside, I also doubt Stephanopoulus' strategy would work, as municipal politics is extremely different from national politics in terms of defining "partisanship" to the point that municipal-level politicians and workers, regardless of party affiliations, have huge incentives to keep election turnout down to maintain power. Vaguely saying that state and federal politicians could "dangle rewards" like endorsements and donations to local politicians to get them on board ignores that those state and federal politicians also rely on endorsements and donations directed from those local leaders in return to also stay in power. Political patronage does not flow just one way.