With good governance and strong property rights, they could. 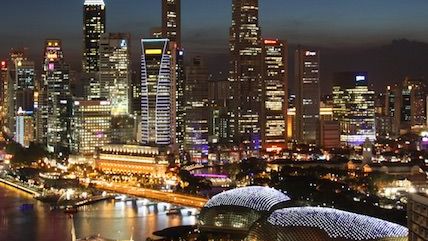 European and Middle Eastern governments have reacted to the influx of the more than 4 million refugees created by the Syrian civil war in a variety of ways: Holding them in bleak desert camps, slowly integrating them into their societies, building fences, and violently turning them away. And of course, more and more European citizens are casting votes for far-right, anti-immigration political parties.

But a few observers have proposed another approach: Create new cities for the refugees.

It may seem radical or unworkable, but there's already at least one Egyptian billionaire who's willing to put his money where his mouth is and buy the refugees their own island. Telecom mogul Naguib Sawiris is Egypt's third richest man and has proposed sinking anywhere between $10-100 million into an island off the coast of Italy or Greece to act as home for hundreds of thousands of refugees.

Sawahiri envisions refugees building hospitals, housing, schools, and other infrastructure on the island. But the outstanding question remains: Who would govern the island and how?

Mark Lutter tackles those very questions over at Medium, where he draws on his experience researching "proprietary cities" to identify three potential governance models:

First, a Charter City, a different government, Canada for example, could offer to govern the refugee city. Second, a private non-profit, for example, the Greek government could create a new non-profit with the UN for the specific purpose of governing the island. Third, a private company could buy an island and negotiate with Greece for economic and immigration liberalization.

Lutter settles on the non-profit model as the most efficient and practical path forward in the short term, while acknowledging that both the Charter City model and a totally privatized city have their own distinct advantages in the long run. He also identifies two features crucial to the success of any "refugee city": Lax immigration laws to allow refugees easy access and economic liberalization to allow rapid growth. In fact, he believes that failure to scrap onerous European-style regulation would doom the idea:

Some data on Greece illustrate the importance of economic liberalization. Greece is a high income country with average per capita income of $25,000 per year, while Syria has average per capita income of $5,000. If we assume the refugee city will have similar income levels as Syria, Greek law will need to be adjusted for the lower level of income. Greece, for example, has a minimum wage of $10,000 per year. If that minimum wage is enforced for the refugee city, it will attract few refugees, as it would price them out of a legal labor market. The same logic applies to other Greek regulations.

Getting a business license in Greece takes 13 days and 2.2% of per capita income. However, given that Greece has income levels five times higher than Syria, it would take Syrian refugees 11% of their income to start a business, an income they probably have not collected since the start of the civil war. Even worse, construction permits in Greece take 124 days, a delay that is prohibitively long if a new city is to be built. Getting electricity takes 70% of per capita income and registering property takes 20 days.

I highly recommend reading the full article here to see the idea fully fleshed out. For real-world evidence of the huge impact that governance differences are already making on refugee camps, contrast Jordan's "informal city" of Zaatari—with its emerging neighborhoods, economy, and paved roads—with the same country's prison-like camp Azraq, which lacks electricity or even clean toilets. Lutter is arguing that government officials, NGOs, and private investors have an opportunity to do much better than even Zaatari has by establishing a special zone on par with China's Shenzhen, which grew from a fishing village of 30,000 people in 1979 to an international manufacturing hub of more than 18 million today.

To learn more about experimental zones in developing countries, watch Reason TV's series "How to Grow a City in Honduras" below. And check out Refugee Cities, a non-profit working to implement some of these solutions.