Hectoring Truth Be Told Forgets the 'Com' Part of 'Sitcom'

Meet a frontrunner for the cancellation pool. 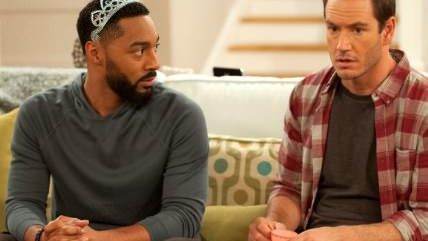 I didn't realize how difficult people find it to understand modern manners until I noticed that Forbes magazine felt compelled to run a list of "27 Etiquette Rules for Our Times" instructing corporate despots to, among other things, stop stealing their employees' lunches out of the office refrigerator. I suppose the fact that it did not explicitly label it poor form to steal an elderly widow's house to put up a casino explains some stuff about Donald Trump.

Happily, television has jumped in to fill this decorum deficit. The four principal characters of NBC's  new sitcom Truth Be Told spend most of the pilot episode trying to figure out when it's okay for white people to use the "n-word." (Never, they conclude, even when singing along to Jay Z records.) The rest of the show is devoted to the guys peering down the decolletage of a busty babysitter, which is apparently still allowed. Oh, and saying "vagina." A lot.

If this sounds somewhat more didactic than funny, then—spoiler alert! —you've already figured out the secret ending to Truth Be Told, which is abrupt cancellation due to acute humorlessness, probably before it's a month old.

Truth Be Told revolves around two couples—one white, one black, and both garrulous to the point of inspiring homicide—who are long-time friends and next-door neighbors. The relentless undramatis personae include Tone Bell (Bad Judge) and Bresha Webb (Hung) as Russell and Angie, the black couple, and Mark-Paul Gosselaar (Saved by the Bell) and Vanessa Lachey (Dads) as Mitch and Tracy, the white one.

Ostensibly these people have jobs—there's an attorney, a college professor, even, implausibly, a comedian—but actually they all seem to have MacArthur fellowships to sit around engaging in endlessly Talmudic dissections of the boundaries of sexual and racial decorum. Not that there's any actual content to the discussions. If this review were a plot point in Truth Be Told, Russell would have clapped his head at the word "Talmudic" and shrieked, "You can't say that!" Mitch would have replied, "Why not?" Russell would have cried out, "Because you can't!" And the studio audience, mindful that its cars were being held hostage by the studio's valet parkers, would have roared.

There is no innate reason why sitcoms can't be funny while at the same time shedding some light on the ragged twilight areas between political correctness and common politesse, or between chip-on-the-shoulder victimology and genuine injury. ABC does it all the time, very well, embracing stereotypes in order to mock them in Modern Family and charting the efforts of ethnic minorities to make their way in a sometimes hostile but often just blunderingly unaware dominant culture in Fresh Off The Boat and Black-ish.

The difference is that those shows are written with a genuine and witty empathy, while Truth Be Told is more of a "look at me, I'm not PC!" shout of self-regard. Compare, for instance, some of the punch lines of a Black-ish episode. In Black-ish, a black father whose son has just been kicked out of school for lip-synching the non-radio-edit of Kanye West's "Gold Digger" broods about the injustice: "Jewish kids get to go to Israel. Black kids get to say this."

Match that to Truth Be Told, in which two friends, one black and one white, are wondering whether the hostess at an Asian restaurant is faking her Chinese accent. (In Hollywood, this is apparently a frequent top of conversation.) "I don't think we're allowed to talk about these things," declares the white guy. "I know I'm not!" Bazinga!

Once Truth Be Told has helpfully disposed of all those excess brain cells you've been hording, you're free to sit through an episode of GSN's new game show Hellevator. Designed for everybody who has ever screamed "Don't go in the basement!" at an about-to-be-ex-ingenue in a slasher movie, Hellevator gives contestants tasks to carry out in an abandoned warehouse populated by knife-wielding maniacs and overenthusiastic undertakers. The various atrocities are presided over by Jen and Sylvia Soska, the Canadian twin-sister auteurs of the epochal Dead Hooker In A Trunk, shrieking stuff like, "You can only live once, but you also only die once!" at the hapless contestants.

It turns out, by the way, that you'll almost always go in the basement if somebody's offering you ten grand. Not that any of the contestants in the pilot appear to engage any sophisticated risk analysis before agreeing to see if they can extricate themselves from being tied up in carts rolling toward a crematorium furnace. They're all students at the University of Southern California, and after seeing Hellevator, you'll understand why students at other California colleges contend the initials USC stand for University of Second Choice, University of Spoiled Children, or Up Shit Creek.