What's Really Wrong with Obama's Syria Approach, and Why His Critics' Approach is Worse

Doing something for no good reason isn't a viable policy doctrine. 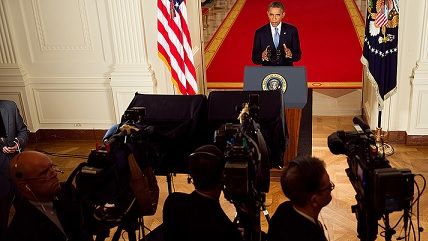 Judging from his actions, one could surmise that Barack Obama views the Syrian civil war as a classic no-win situation: a devilish cauldron of warring factions, shifting allegiances, and horrific destruction on all sides. And, if that is what he believes, then he's exactly right.

But now some are using Russia's decision to try to prop up Bashar al-Assad's teetering regime as a justification for renewed U.S. involvement. They claim that it proves Obama's approach—not just for Syria, but for the whole world—has failed. Richard Cohen castigates the president for his excessive caution, and speaks of the high costs of avoiding war. The Washington Post calls on Obama to "carve out safe zones. Destroy the helicopter fleet Mr. Assad uses for his war crimes. Provide aid to the battle-hardened force of 25,000 fighters."

Surely all of these critics know that there is little that the United States can do alone. And it is difficult to work with allies and sometime partners in the region because they have competing goals—with us, and with each other. Even if we could intervene constructively, it's not clear that we should. The risks of inaction seem preferable to those of action.

But the president's unwillingness to say these things reflects a major foreign policy divide in the country at large. On one side are those who believe that the wars in Iraq and Afghanistan were tragic errors, never to be repeated. On the other are those who argue that both wars were mishandled, but are still confident that the United States can and should intervene in foreign disputes and topple unsavory dictators. They still want to try to arrest the collapse of failing states, and believe that they have the power to do so. We saw those debates play out over what to do in Tunisia, Libya, Yemen, Bahrain, Egypt, and, of course, Syria.

It appears that the president is at war with himself. No one can dispute that the Syrian civil war is a tragedy. But no one can credibly claim that there are vital American security interests at stake in Syria. Who rules Damascus, and whether they rule it poorly or well, will not materially affect the safety of the average American.

A misguided few might manage to leave their homes and families, get to the fight, survive the war, and return to their country of origin with a newfound enthusiasm for wreaking destruction there—but they could just as easily come from dozens of other places around the world. For now, it appears, most foreign fighters drawn to Syria have merely served as cannon fodder for Al Nusra, ISIS, and other extremist groups.

Americans are willing to support U.S. military missions abroad when this nation's security is at risk. Some are even willing to countenance the use of force to advance humanitarian ends—including protecting refugees or halting gross human rights abuses—but only when it is obvious that the mission is attainable at reasonable cost.

That has never been the case in Syria. The situation on the ground is too fluid. The partners that we might find tolerable are few and far between, and, it turns out, unreliable. But because Obama and the rest of his administration are unwilling to state that explicitly, they try a bunch of half measures, saying they're doing something, without ever believing anything will actually work.

Occasionally, discipline breaks down. Thus you had White House spokesman Josh Earnest found guilty of a classic Washington, DC gaffe—speaking the truth, inadvertently—that they did the whole training thing to silence the critics. When pressed by reporters about the failure of the Syrian rebel training program, Earnest reiterated the administration's position that "this was a more difficult endeavor than we assumed" and that it's "time for our critics to 'fess up in this regard as well. They were wrong." But when the dust over that admission settles, we are back to where we started: a muddle. A disconnect between rhetoric and reality.

It is time for the president to forcefully state what everyone knows to be true: the United States has no magic formula for solving the Syrian conflict. Neither does Vladimir Putin. Outside involvement has fueled the multisided civil war, but failed to deliver a decisive victory for any one faction. Russian arms are unlikely to tip the scales. It appears to be a classic case of misplaced optimism on Putin's part, or an act of desperation. That is not an argument for greater U.S. involvement, and President Obama should say that.

If the president's critics disagree, let them make the case to the American people that it is again time for the United States to become embroiled in another civil war in the Middle East. Emotional calls to "do something" or vague invocations of the importance of American leadership, are no more useful than Obama's half measures.