With 3D-Printed Guns Beyond Control, DIY Nukes Are the Chic New Concern

Increasingly sophisticated homemade guns are so entrenched cops fear their use by organized crime, so now let's fret over desktop weapons of mass destruction. 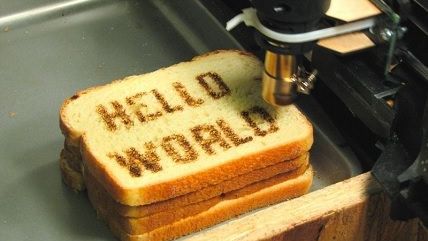 On Thursday, after the Umpqua Community College shooting, President Obama took to the airwaves to blame the murderous acts of a motivated, vicious individual on America's unique status as "the one advanced nation on Earth in which we do not have sufficient common-sense gun-safety laws" (maybe Norway and France could show us how to do it right).

The president's words rang hollow to many observers. Perhaps that's because he openly boasted of politicizing the issue even while remaining vague as to the definition of "common-sense gun-safety laws," maybe it's because these crimes remain horrible and resistant to analysis but fortunately rare, or it could be that the legal restrictions on guns the president and his chums have touted over the years have won compliance only from the reflexively law-abiding and defiance from anybody else, even as it's never been easier to ignore such laws.

Just days before President Obama's speech, a police official in essentially gun-free Japan lamented to Vice News that a struggle among Yakuza organized crime factions threatened to turn violent, and that the country's tight weapons restrictions seemed powerless in the face of home-built drones wielding bombs, and 3D-printed guns.

"Even if a gang has no weapons on hand, they just need the right equipment," warned a detective with the Hyogo Police Department. "Print, kill, melt the gun. Those new guns will be hard to trace…. Escalation could be very fast and very bloody."

That the powerful crime syndicates—the organizations themselves are legal, with corporate headquarters, logos, and political connections somehow separate from their illegal activities—would bother to print guns rather than smuggle them in or "borrow" what they need from government contacts may be a testament to the technology's growing maturity. In 2014, just a year after the original 3D-printed gun was unveiled by Cody Wilson, Japan's Yoshitomo Imura was the first person imprisoned for 3D-printing a firearm. His capture was no feat of forensic scrutiny; Imura had publicized his successes with little apparent regard for the legal status of his efforts.

"This has shown that anyone can illegally manufacture guns with a 3D printer, flaunting their knowledge and skill, and it is an offense to make our country's strict gun controls into a dead letter," the judge in the case reportedly huffed.

But dead those controls pretty much are—and so are those elsewhere. "Proposed legislation to ban 3D printing of weapons may deter, but cannot completely prevent their production," the U.S. Department of Homeland Security had conceded by then. "It is very difficult to do anything about it," a Europol official agreed.

Yoshitomo Imura's revolver design has since been refined, with functioning examples produced elsewhere and the plans available for download around the world. Aficionados can print their own ammunition now too.

In this artisanal age, perhaps the Yakuza agree with so many others that craft-produced products have much to recommend them over their commercial counterparts. Who doesn't love that extra authenticity?

With home-brewed guns growing in sophistication, easily produced even without specialized skills, and nearly impossible to thwart, it's about time for the concerned class to get their panties in a bunch about something new. That fresh and shiny fear revolves around 3D-printed weapons of mass destruction.

"Within a few years, the greatest challenge to the government's ability to control firearms will be advances in additive manufacturing, popularly known as '3-D printing,'" Louisiana State University's Daniel C. Tirone and James Gilley recently trumpeted in a Washington Post op-ed that the Yakuza may have found intriguing.

Touting their larger treatment of the topic in the Journal of Policing, Intelligence and Counter Terrorism, Tirone and Gilley warned that "[t]he ability to 'print' or manufacture guns privately will allow individuals to bypass background checks, the primary way that guns are regulated today. And that challenge will expand exponentially as the technology advances, one day enabling individuals to print chemical, biological and nuclear weapons of mass destruction at home."

Even a techno-enthusiast such as myself has trouble making the jump from printable mechanical objects like firearms to "My First WMD" kits on every petty tyrant's and terrorist's wishlist. Nukes? Really?

But chemical printing is already a thing, promising not just eased pharmaceutical research, but the ability to print otherwise expensive-to-produce orphan drugs (or illicit intoxicants) "at point of need." As of this year, 3D printers can operate at the molecular level, potentially building even live tissue from the ground up. Though not uranium any time soon.

"It should also be possible to use 3-D printers to print components needed to produce nuclear weapons, potentially even from fissile materials such as uranium or plutonium," Tirone and Gilley insist.

The authors extrapolate more than a little to arrive at their worries about a desktop bomb in a box. But who knew 20 years ago that the ultimate rebuttal to gun control dreams would be automated home-based manufacturing with widgets priced within most people's budgets? Maybe the Yakuza and other evil-doers of the future really will order their nerve gas factories from Amazon (pro tip: go with Prime membership if you want delivery in time for the Spring offensive).

Tirone and Gilley suggest that, when it comes to modern DIY technology, governments must act in ways "countering its potential for mass destruction."

That's a little vague and open-ended. My guess is that we'll have to listen to a president of the future fret that as "we do not have sufficient common-sense DIY-safety laws," hinting at a grab-bag of impractical and unenforceable restrictions on 3D printers, CNC machines, traditional tools, and devices we have yet to imagine.

It's clear that the cat is out of the bag when it comes to people's growing ability to make whatever they damned well please, guns included, no matter what governments may want. And the professional worry warts can't see any end in sight.