Joe Biden is Running Out of Time 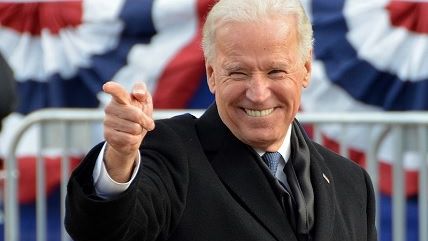 The first Democratic debate is scheduled for October 13, 2015. It will be organized by CNN, which said it would accept Joe Biden as a participant so long as he announced his intention to run for president.

With only six debates scheduled by the Democratic National Committee in 2016—compared to the 26 debates and forums in the 2008 election cycle—Joe Biden, who would be the latest major candidate entrant into the presidential campaign in several cycles, can't particularly afford to miss it.

High-profile potential candidates have waited this long, and longer, to announce they weren't running. Colin Powell announced definitively he wouldn't be running for president in 1996 in November 1995, and Mario Cuomo, widely seen as a frontrunner in the 1992 Democratic primaries, announced he wouldn't run in December 1991.

Even with 26 debates in the 2008 cycle, the first Democratic debate, aired on MSNBC on April 26, 2007, featured all eight candidates who would make it to the Iowa caucus, including Joe Biden.

Carly Fiorina's significant rise in the polls after a widely praised performance at an undercard debate illustrates the importance of participation in the debates. Bernie Sanders saw his polling rise from the low single digits to within spitting distance of Hillary Clinton, fueled in part by Democrats' frustration with a lack of non-Clinton choices.

Sanders passed Biden's position in national polls in late June, when both were at around 11 percent. Biden saw his own surge in the polls starting in late August, hitting 20 percent in September as a non-candidate.

If there were ever a time for Biden to declare he was running for president, between his mini-surge in the polls, growing disillusionment among Democrats with the scandal-ridden Clinton, and the first Democratic debate coming up next Tuesday, it's not. Sources inside the Biden campaign seem to confirm that. Politico reported this morning that Biden's "confidantes" have sketched out a timeline that would see Biden reach a decision by Monday, October 12, at the latest.

Politico repeats prior reporting that Joe Biden has decided to skip the first Democratic debate. But that news, which came out late last month, appeared to be based on Biden reportedly not making a decision until the end of October. The end of October is about as late as Biden can make a decision, because filing deadlines for state contests start to come up in November.

Last month, sources close to Biden said he wasn't going to participate in the debate based on the fact that he's not preparing. Sure, even Joe Biden has to prepare, but given that his charm among Democratic base voters is his propensity to speak off the cuff (most famously when he came out in favor of gay marriage in 2012 before President Obama had announced his "evolution" on the topic), how much preparation does he need? Missing the debate, on the other hand, would be a huge wasted opportunity to capitalize on the momentum Biden's achieved as a non-candidate.

While Biden is currently polling better head-to-head against most potential Republican candidates than Clinton is, it's important to remember there's little substantive difference between Biden and Clinton. Both are Democrats who served under the Obama administration, aging politicians who were both there to cheerlead some of the worst policies devised by Democrats in the last thirty years—including the expansion of the war on drugs and the broader criminal justice-industrial complex—and to rubberstamp some of the worst policies devised by Republicans in the last decades, including the war on Iraq and making the war on terror a permanent fixture in U.S. domestic and foreign policy.

That Joe Biden is not actually Hillary Clinton may be the only thing he has going for him, and it may be enough to make him a contender. That says as much about the state of the Democratic race as it does about Biden and Clinton.