Sophomoric Dr. Ken and SuperMansion Offer the Cheapest of Laughs

Television premieres slow down with a couple of uninspired comedies. 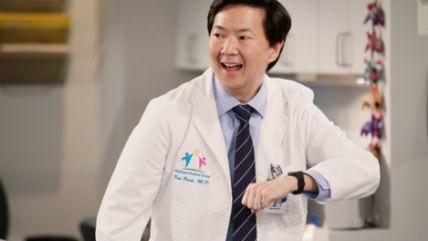 I'm often tempted to regard college, as Bluto Blurtarsky once almost said, as the best seven years of my life. And then I come across an old label from a Boone's Farm bottle or channel-surf into a Bertolucci marathon, and I snap out of it.

Like college cinematic obsession and college oenology, college bull-session humor tends to look better when viewed through the haze of nostalgia than close up in the here and now. Television offers a pair of exemplary reminders this week with comedies that practically define the word sophomoric.

Both ABC's Dr. Ken—the only broadcast network debut in the coming week as the fall-season rollout slows to a crawl—and online site Crackle's SuperMansion have a few wouldn't-it-be-great-if type laughs. But in the morning, you'll realize you would have made much better use of your time if you'd written that western civ paper, and you wouldn't have that hangover, either.

Dr. Ken stars Ken Jeong, who in real life—though the phrase seems oddly inappropriate in this usage—gave up an actual career in medicine for standup comedy and eventually hit it big in the Hangover movies and NBC's back-to-school comedy Community. Which occupation profited more from this decision, medicine or comedy, remains a difficult question that will not be answered by Dr. Ken.

The conceit of Dr. Ken is that Jeong is a brilliant physician with sphincterish personal tendencies—literally, in the case of a patient who comes in asking to be examined for hemorrhoids, only to be told that "you would know, because your head's up your ass." He's not much better at home, where he rebuts his wife's argument that teenagers need some freedom to make their own decisions: "They need duct tape. They need to be tied down."

Whatever tattered remnants are left of your inner sophomore are likely to giggle the first time you hear Jeong rant, in his crowded waiting room, that "patients are such whiny, complaining bitches!" (You're also likely to have a recurrence of the profound conviction that you, too, could have been a TV writer. Let it pass.)

Jeong, however, is still too much of a standup comedian, belting out punchlines and pratfalls like a machine-gun to drown out the heckler in the back, to sustain Dr. Ken beyond sketch-level comedy. And he's too manic (a self-proclaimed "five-foot-five inches of fury") to allow for much help from the rest of the cast.

Crackle's SuperMansion also boasts a what-was-he-thinking star—Bryan Cranston, who could have done most anything he wanted after winning four Emmys for Breaking Bad. Mysteriously, he chose to help produce this stop-animation cartoon about aging superheroes that's about as tired as its protagonists.

Cranston also voices the lead character, Titanium Rex, the paunchy and irascible head of the League of Freedom, which helped America win World War II (particularly in battle Frau Mathis, a Nazi supervixen with "a hinged jaw and a taste for men") but lately has been reduced to a collective mass of sagging flesh and throbbing varicose veins. After knocking down the Washington Monument while trying to catch a burglar, the League is ordered to move into a mansion and train a group of millennial superhero wannabes to take over.

Among Rex's companions in senescence is Cooch, an "artificially enhanced feline" who hasn't been able to shake her old habit of sniffing suspects' butts (she also has an unfortunate tendency, in tough moments, to get distracted by red laser dots). Then there's Jewbot, formerly Robobot, plunged into an existential crisis after seeing Beaches ("What am I, just a collection of ones and zeros?") and now on a quest to discover his supposed Jewish roots.

There are others, but you get the idea, which is never much more than an idea. As you watch SuperMansion, you can practically hear the voices of drunken pre-meds in the background: "And then, like, they have fart guns!" Ha ha. Hey, is the keg empty? I think I'm headed back to my room before Buzz Lightyear's lawyer gets here with the defamation suit.