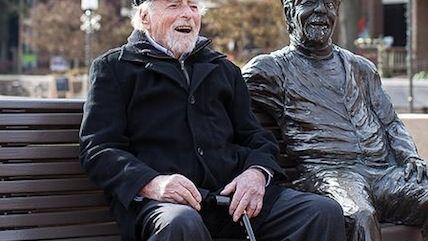 Robert E. Simon, Jr., a major figure in the "new towns" movement of the 1960s and '70s, passed away this week at age 101. The new towns were an unlikely-sounding marriage of '60s utopianism and profit-seeking suburban development, and Simon was the man who in 1964 founded one of the most resilient communities to emerge from the movement: the Virginia town of Reston, named for his initials.

I published a piece in Reason about the new towns back in 2003, with a focus on Reston and Columbia, Maryland. Reston, I wrote,

is a private community, not unlike a condominium—except it has a population of 60,000. It is divided into villages, which are in turn divided into cluster associations (and contain condos, apartment buildings, and noncluster houses as well). Between them, these constitute a system of government that is part homeowners association and part community land trust. Residents whose property does not meet local standards can be penalized: The Reston Association has the legal authority, by voluntary covenant, to tow away cars, cut lawns, or otherwise compel errant homeowners to conform, and then to charge them for the work it has done. The same body is responsible for maintaining Reston's 1,000-plus acres of open space, which include lakes, parks, and nature trails….

[The town] was built with liberal social ideals in mind. Its founder, after all, is a lifelong Democrat whose parents voted for the Socialist stalwart Norman Thomas. That said, Simon says he doesn't understand why such a fuss was made over his project. "I looked at what we were doing as logical and with ample precedent rather than as social change," he told me in an interview last year. "I was really astonished at all the attention it got." Some of the local real estate brokers warned potential buyers away from Reston on the grounds that it was "communist," Simon reports. "It was the black thing, of course—the integration," he says. [Reston was unsegregated from the start, while Jim Crow ruled the rest of Virginia.] "And the townhouses. There were no townhouses in the boonies until Reston."…

General Electric briefly planned to build 20 such towns around the country, and it seriously considered acquiring Reston as part of the project. It changed its corporate mind when one executive blackballed the purchase on the grounds that Reston was integrated. This scuttled the whole project, since G.E. wasn't about to embark on the P.R. disaster of building 20 exclusively white communities.

In 1967, as Reston was struggling with some serious financial problems, Gulf Oil took it over. (Now you know the answer to the trivia question, "What idealistic '60s community was bought up by a big oil company?") Smith was squeezed out not long after that, and the new owners modified his vision in a variety of ways. That didn't destroy Simon's interest in the new towns, but his next project would be mired in bureaucracy:

With the Housing and Urban Development Act of 1970, the government began underwriting new towns as well. These were built by private entrepreneurs, but the feds offered financing, and with money, naturally, came strings. Simon, fired from Reston in 1968, was briefly associated with one of those projects, a New York community called Riverton. "The relationship with the government was really hideous," he recalls, "because the people administering it were constantly dreaming up things that they thought would be fun." An example: The feds decided that every new town would have to present a budget for the next five years, with the first year broken down into monthly budgets. If any of the items in the budget deviated from the projection by more than 15 percent, the entire forecast had to be done again. The practical result, Simon reports, was that "every developer had to do a five-year projection every month."

Simon continued to work in real estate after the Riverton flop, and in the '90s he returned to Reston; when I interviewed him there he lived in a high-rise overlooking an artificial lake. When he died he still made his home in the town he founded.