Bill fails, but the battle's not over. 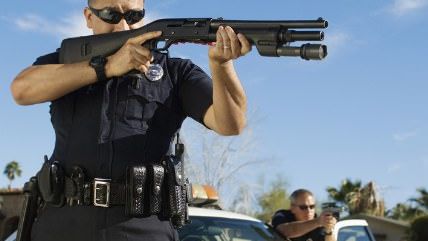 Yesterday, California Senate Bill 443 went down in flames in the state's Assembly. The bill, sponsored by Democrat Holly Mitchell in the Senate and Republican David Hadley in the Assembly, would have reformed the state's asset forfeiture regulations to require that police and prosecutors actually convict citizens of crimes before seizing ownership of their assets to spend on themselves.

The bill originally passed overwhelmingly in the state Senate earlier in the year, but then police and prosecutors got wind of it and began a campaign of fearmongering against it, telling legislators it would threaten budgets and would cut law enforcement out of the federal asset forfeiture sharing program. The law had been stripped down so that the state would be able to continue participating in the federal program, but even that wasn't enough. It didn't even get close to passing the Assembly. California will not be following in New Mexico's footsteps, at least not this year.

To figure out what will come next, Reason contacted Lynne Lyman, the California state director for the Drug Policy Alliance (DPA), and Mica Doctoroff, a legislative advocate for the American Civil Liberties Union (ACLU) of Northern California. The two organizations were both directly involved in advising lawmakers and lobbying to get SB 433 passed. Both of them see a focus on increasing community awareness about the problems of civil asset forfeiture in order to push for reform. Doctoroff noted that an ACLU poll found that 76 percent of Californians think police shouldn't be able to seize and keep property from those who have not been convicted of a crime. It's a matter of turning those opinions into activism.

"I think yesterday's vote has raised a tremendous amount of awareness," Doctoroff said. "We are hopeful we will continue with this momentum and that voters will continue to call on their elected officials."

Lyman said DPA had originally had put together a 10-year plan to build a push for asset forfeiture reform. But there had been so much momentum elsewhere in the country for changes she thought that maybe they would win early. Now they'll have to take a closer look at their strategy.

"Basically what happened yesterday is that legislators were convinced or scared by the lies they were told," Lyman said. "We have to build a movement of people who are going to have their [Assembly] members' backs when it comes down to it and turn out and create a public momentum around it. We have not done that work yet."

Lyman noted that the Black Lives Matter movement had adopted forfeiture reform as one of its policy solutions, adding them to a collection of organizations on the left and right and everything in between. But winning leaders and opinion-makers is one thing—they still need to create a "community groundswell" to counteract the influence of law enforcement, Lyman said.

Or, they could just go around them. California has a very robust ballot initiative program, and voters have passed criminal justice reforms when given the opportunity. Voters have reduced penalties for some crimes, scaled back "three strikes" enforcement, and directed low-level drug offenders toward treatment rather than jail.

But that's a plan that would have some timing issues. While Lyman and Doctoroff were both open to the possibility of a ballot initiative, the earliest they'd bring it before the voters would be in 2018, which would be a mid-term election with a likely lower turnout. But if the polling is accurate, it's certainly an option if they aren't able to push legislation through by then.

"Across the country and here in California there is tremendous support from constituents for reform," Doctoroff said.