Scott Walker Flip-Flops Again on Ethanol Mandates. Or Did He Never Actually Support Them?

Governor calls for two-year 'winding down' of the Renewable Fuel Standard. 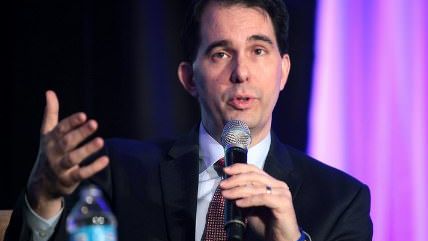 Wisconsin Gov. Scott Walker took heat back in March for apparently flip-flopping on his position on federal ethanol mandates in fuel. He once was a vocal opponent of mandates of all types from the state and federal government as an example of "central planning."

But then, earlier this year, with eyes focused on Iowa and a possible presidential run, he appeared to reverse course. Matt Welch took note of the reversal, where Walker said he wanted to deal with "market access issues" before eliminating the mandates and subsidies. Timothy Carney at the Washington Examiner criticized Walker's collapse on ethanol, noting that Walker appeared to want to keep the mandate until ethanol fuel was competitive with oil. "Given ethanol's inherent shortcomings, that day may never come," Carney pointed out.

Now, months later, Walker has come back and explained that actually he wants to wind down the ethanol mandate over two years. He said so directly to Carney in a phone interview:

If Walker really would push for a two-year sunset of the [Renewable Fuel Standard], paired with legislation removing market access issues for ethanol, that puts him in a similar place to Rand Paul. Paul has proposed a bill (co-sponsored by Iowa's Chuck Grassley, an ethanol champion) to remove EPA limits on how much ethanol refiners can blend with gasoline, and Paul has also said he opposes the ethanol mandate.

If Jeb Bush can clarify his position, you could get a GOP field in Iowa where all the top-tier candidates oppose the ethanol mandate.

What's interesting is that Walker had months to correct the perception that he had flip-flopped on ethanol mandates and mention this proposal, but he's just doing so now. What has happened? Well, once Walker was the undisputed front-runner in polls for the Iowa Caucus. His poll numbers improved even further when he explained his reversal on ethanol in March. But the latest numbers have him dropping below both Donald Trump and Ben Carson following the first debate. Pandering to Iowan interests might not even get him a win there, let alone any other state.

Peter Suderman extensively analyzed Walker's history in our July issue of Reason, including his shift of position on ethanol.