Movie Review: The Man from U.N.C.L.E.

Henry Cavill and Armie Hammer in a boneheaded sub-Bond caper. 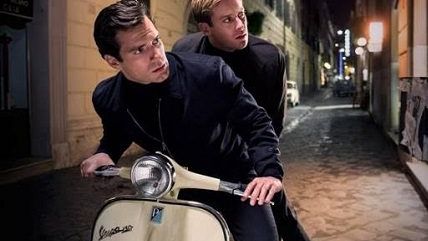 It's hard to imagine Hollywood's most-prized action-movie demographic—teenage boys—getting very excited about The Man from U.N.C.L.E. The picture is based on an old TV series that went off the air 47 years ago. It's set in 1963, at the height of something called the Cold War. And it continually references James Bond films of ancient provenance.

You don't have to be a teenager to be bored by this movie, however. The plot, co-concocted by director Guy Ritchie, is a generic muddle (nuclear menace, Nazi gold, evil neo-fascists), and the picture's narrative confusion, coupled with mindless dialogue and sprinklings of fizzled wit, is a challenge to endure. Additionally unhelpful are the lead actors, who give the impression of having only met just before the cameras started rolling.

Vikander's character, Gaby Teller, is the daughter of an ex-Nazi rocket scientist recently surfaced in Rome, where he's fallen into the clutches of the scheming Vinciguerra family, plotters of world domination. Solo pries Gaby out of East Berlin with Ilya in frantic pursuit. Shortly after, he is informed that in the interest of foiling the Vinciguerras, the Soviets have okayed a one-time team-up of the perma-smirking American agent and the lunkish Illya. Soon all three decamp for Italy.

The Man from U.N.C.L.E. TV show, which aired from 1964 to 1968, was a riff on the early Bond films (it debuted the same month that Goldfinger launched a worldwide Bond-mania). Ritchie preserves that aspect of the show. At one point we see a hotel-room door cutely numbered "707," in the familiar 007 font. At another there's a mention of "Count Lippe," a character in Thunderball. But these nudging Bond references serve only to remind us of the sleek, breezy style of those old movies, something of which Ritchie—best known for showboating split screens and thunderous soundtracks—seems incapable.

The director manages one nifty action sequence, involving a truck and a boat and a bottle of wine, but is otherwise dedicated to the usual thug-punching and automotive chases. He also has an unfortunate enthusiasm for anachronistic lines ("I'm outta here!") and unfunny jokes ("Inside every Kraut there's an American trying to get out"). And there's an odd homoerotic undertow between the two agents. Cavill, who has the smoothly sculpted features of a department-store mannequin, projects a neutered romantic presence, and Hammer maintains a stubborn resistance to Gaby's obvious carnal come-ons. The scene in which these two snip at each other about women's clothing makes no sense in terms of the characters, since their flirty relationship never plays out. And while Vikander, whose snappy spirit recalls the late Romy Schneider, does all she can with Ritchie's occasional attempts at giddy farce (another of his non-specialties), she can't salvage them on her own.

The movie suffers most whenever Hugh Grant puts in an appearance, playing a crisp British spymaster. Grant is so effortlessly stylish—so genuinely breezy—that he exposes Ritchie's picture as the hapless pastiche that it is. James Bond will always be back. I think it's safe to say that Solo and Kuryakin—despite a limp tease at the end—won't.