Q&A with Reason's Ron Bailey on his new book, The End of Doom. 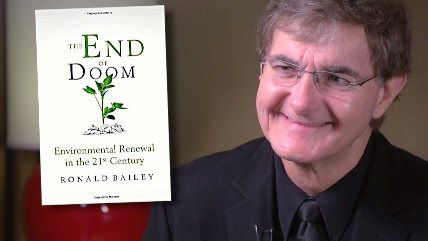 This story was first published on July 21, 2015. Here's the original writeup:

"You will always have people selling doom," says Reason's Science Correspondent Ronald Bailey. "It's lucrative and it makes you sound serious. But they will be proved wrong."

In his new book, The End of Doom: Environmental Renewal in the 21st Century, Bailey acknowledges the reality of climate change, but insists that humans will utilize technological advancements in solar, nuclear, and other forms of energy to manage any hazards long before oft-predicted calamity strikes. Bailey argues that world population will peak later this century and prices for all sorts of commodities—from oil to food to metals—will continue to fall as well.

Bailey paints a highly optimistic vision not just for the environment but for human flourishing in general, a point of view he concedes is generally not as good for book sales as visions of the apocalypse are. But he, notes, the optimistic vision does have the advantage of being true.

About six and a half minutes.

Scroll down for downloadable versions and subscribe to Reason TV's YouTube Channel to get automatic updates when new videos go live.