Bullies and Hypocrites: Gawker Deserves This New Level of Hate 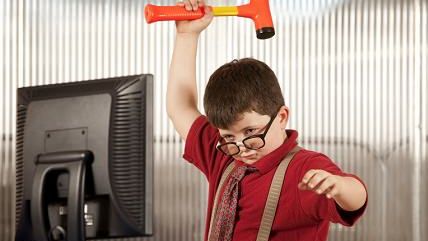 The latest wrinkle in the Conde Nast gay escort controversy is that Gawker publisher Nick Denton has taken down the salacious story—over the furious protests of many Gawker editors. The (recently unionized) writing staff of the company released the following statement in response:

Our union drive has expressed at every stage of the process that one of our core goals is to protect the editorial independence of Gawker Media sites from the influence of business-side concerns. Today's unprecedented breach of the firewall, in which business executives deleted an editorial post over the objections of the entire executive editorial staff, demonstrated exactly why we seek greater protection. Our opinions on the post are not unanimous but we are united in objecting to editorial decisions being made by a majority of non-editorial managers. Disagreements about editorial judgment are matters to be resolved by editorial employees. We condemn the takedown in the strongest possible terms.

Management voted either 4-2 or 5-1 to yank the story after it was published, according to Executive Editor John Cook, who claimed on Twitter that "I and my colleagues argued as strenuously against [taking down the story] as we could, and we lost."

Such judgment does not reflect well on Gawker's editorial team. It's the near-unanimous opinion of other journalists, some former Gawker employees, and Gawker's own commenters that the story should never have been published in the first place.

I could not agree more. There was no legitimate reason for Gawker writer Jordan Sargent to aid a lunatic conspiracy theorist's quest to blackmail a relatively obscure man, presumably shattering that man's family in the process. Reasonable people can disagree about whether politicians like Anthony Weiner and anti-gay religious hypocrites deserve to have their private moral failings brought to light (I personally lean toward respecting people's privacy, even when they are monsters), but Gawker's actions in this case served no good purpose.

That's not to say that reporters should be excessively deferential to their subjects' sensibilities. Rolling Stone's failure in the University of Virginia rape story was partially born of its desire not to press its source for uncomfortable truths. But in a very real sense, Gawker did a similar thing here. Sargent respected the privacy of the escort—a manifestly untrustworthy conspiracy theorist—but not the person whose life he was about to destroy. In some sense, Sabrina Rubin Erdely dedicated herself to telling a false story of enormous consequence. Sargent dedicated himself to telling a true story of almost no consequence. In doing so, both made horrible mistakes.

There is a temptation to defend what Gawker did as some kind of exercise in radical free speech. According to Gawker's own editorial guidelines, there are only two things that matter when deciding to publish a story: is it true, and is it interesting? Gawker Editor in Chief Max Read defended the story thus: "given the chance gawker will always report on married c-suite executives of major media companies fucking around on their wives."

It would be easier to believe that this was an articulation of some clear principle if Gawker writers weren't such hypocrites. Many have derided the exact same kind of radical, offensive free speech when other platforms for expression—Reddit, for example—have allowed similarly extreme transgressions. Writers at Gawker and Gawker affiliate cites have criticized the publication of celebrity's leaked nude photos. They have assailed Charles Johnson for doxing uncooperative story subjects. On Twitter, the beloved Ken White of Popehat described the double standard in castigating terms:

It's in line with "humiliate Incorrect people while decrying humiliation of Correct people."

It's in line with "suck up to, and reward, evil if it casts someone Incorrect in a bad light."

It's in line with "mouth platitudes about being tolerant and supportive of gays while outing ones of whom we disapprove."

When Cook suggested that the story was solidly in line with "what Gawker has asked its writers to do for years," White responded: "That's true. That's the problem."

The Washington Post's Erik Wemple thinks it's possible that Gawker could be sued over this story:

A plaintiff seeking damages for what's known as "publication of private facts" needs to fulfill a four-part test:

• "The disclosure of facts must be public." That's an easy one, given that Gawker's piece is out there.
• "The fact or facts disclosed must be private, and not generally known." Our Nexis search confirmed as much.
• "Offensive to a Reasonable Person: Publication of the private facts in question must be offensive to a reasonable person of ordinary sensibilities." Twitter could well assist in making this case.
• "The facts disclosed must not be newsworthy." Always a subjective consideration, yet the Erik Wemple Blog feels no more enlightened about Condé Nast than it did previously. It does know that somewhere out there is an escort who tries to leverage his work for political assistance. Wow.

All well and good. But the market offers us a more immediate method of punishing Gawker for its hypocritical, bullying immaturity—one that people as different as Christina Hoff Sommers and Lena Dunham can get behind: stop reading the site.