The Iran Debate and the Echoes of History

Criticism of presidential treaties with adversarial governments goes back a long way. 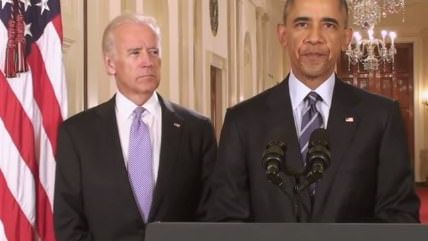 If Rip Van Winkle had gone to sleep sometime in the past five decades and awakened today, he would know nothing about the U.S.-Iran nuclear deal. But he would have no trouble following the debate, because he's heard it before. Presidents, adversaries and the world have changed; the arguments have not.

It's no surprise that the Republicans running for president find the accord to be lacking in any merit whatsoever. Wisconsin Gov. Scott Walker ranked it among Barack Obama's "worst diplomatic failures." Jeb Bush called it "appeasement."

Even Rand Paul, who sometimes diverges with GOP hawks, rejects it. Some of the other candidates couldn't comment because their heads were exploding.

The United States has a long history of presidents, including Republican ones, striving to address nuclear dangers through negotiation instead of war. Every president going back to Dwight Eisenhower has pursued—and in most cases achieved—agreements involving doomsday weapons.

Richard Nixon signed the first Strategic Arms Limitation Treaty with the Soviet Union. Jimmy Carter put his name on the second—which Ronald Reagan opposed, only to abide by its terms once in office. Reagan went on to forge his own nuclear agreements with Moscow.

George H.W. Bush negotiated another. So did Bill Clinton, who also made a nuclear deal with North Korea. When it collapsed, George W. Bush tried to reach a second accord.

But the U.S. also has a long history of critics treating such efforts as products of blindness, wishful thinking and cowardice. Obama can take some consolation in knowing that Nixon and Reagan were also vilified as craven dupes. George W. Bush's efforts in the North Korea talks were labeled "immediate surrender."

It's not so much that the critics regard Obama as a villain and a weakling, though they do. It's more that he is engaged in a task they regard as inherently hopeless and destructive, if not evil. They could no more accept it than Baptists could renounce the Bible.

This debate may appear to be just between Republicans and Democrats. But the real dispute is deeper than that.

The particulars of any deal are not the problem. Arms control and diplomacy are the problem, because they require us to bargain with our adversaries to achieve compromises that serve the interests of each side. They obligate us to behave as though hostile governments have a right to exist.

By that logic, diplomacy is inferior to war, because war allows us to destroy our enemies rather than dicker with them. So the theory goes, and sometimes it works—as when we smashed Nazi Germany. But war doesn't always work out well. Iraq and Afghanistan are just the latest examples of its pitfalls, including the possibility of creating new and worse dangers.

In the case of Iran, Obama's critics insist we can get our way without launching air strikes. They claim economic sanctions, cranked higher, would make Tehran surrender.
But the Bush administration tried that approach without success. As The New York Times reported this week, "every new round of sanctions was answered with an escalation in the size and aggressiveness of the Iranian program to enrich uranium."

University of Chicago professor Robert Pape, who has studied previous sanctions efforts, says no country has ever been forced to capitulate on a vital matter of national security through economic sanctions. What makes anyone think Iran would be the first?

History indicates that even conservatives, when they reach the Oval Office, come to appreciate the value of negotiating on nuclear disputes rather than going to war. The critics? They never learn.