Obama to Iran Critics: Support the Nuclear Deal or Push for War

Those are the options, the president says, anything else is posturing 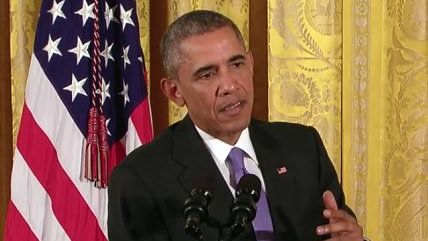 President Obama held a press conference today to defend the deal struck between Iran, the U.S., and five other countries, and to advocate for Congress to approve it. Without being as explicit about the deal being far from perfect, Obama largely made the same argument for the deal Shikha Dalmia made here yesterday morning—that the deal is better than any other option.

Obama acknowledged Israel and other allies in the Middle East are not entirely unjustified in being worried about the deal, but insisted that the mechanisms put in place in the negotiated deal—inspections of nuclear sites, tracking of uranium, etc—are the best insurance against a nuclear armed Iran.

"Is it possible Iran will try to cheat despite having all these… inspection verification mechanisms?" Obama asked. Despite the inspection regime imposed by the deal being the "most vigorous" in history, said Obama, it was still possible Iran would try to cheat. But, Obama noted, "the only argument you can make against the mechanisms that we put forward is that Iran is so intent" on acquiring a nuclear weapon that "it doesn't matter" what the world does. "That," Obama pointed out, "means you can't negotiate. What you're really saying is that you have to apply military force to guarantee they don't have a nuclear program." And, Obama insisted, critics of the deal were not proposing a military campaign, or, really, any other alternative.

Sen. Rand Paul (R-Ky.), in rejecting the deal, parroted the position of his colleague and competitor for the Republican presidential nomination, Sen. Lindsey Graham (R-S.C.), saying he too would have preferred the temporary arrangement agreed to in April remain in place instead of the new deal. But that's not realistic. The temporary measure was a temporary measure, passed in order to provide time for a final deal. It wasn't designed as a long-term solution and there's no reason to believe Iran, or the other sides in the negotiation, would agree to extending it in lieu of a deal.

As for the lifting of the arms embargo, Obama said the U.S. remained concerned, but noted various international laws permitted the U.S. to interdict arms shipments headed from Iran to militant groups in the region. And should Iran be found to be violating the terms of the deal, Obama noted, sanctions would "snap back" immediately. During the question period, he more or less dismissed the notion the U.S. would cooperate more closely in evicting the Islamic State in Iraq and Syria from Iraq.

Obama also rejected the idea he was "content" with Americans still being held hostage in Iran, calling the National Journal's Major Garrett's question "nonsense." The president said tying the release of hostages to a nuclear deal wasn't "logical," because, he argued, it would signal to Iran that it could get more concessions based on the fact that he's holding hostage. Obama insists his administration is "working every single day" to get the hostages out of Iran.