Obama on Cosby: Using Drugs on People to Get Sex Without Consent is Rape

He doesn't like commenting on specific cases with possible criminal and civil issues though, he says 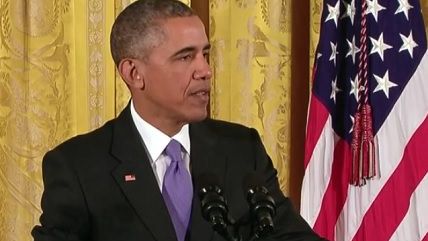 On that last point, Obama said there was "no precedent for revoking a medal." As for the specifics of the Cosby case—he is accused of raping more than a dozen women over the last several decades, and last week court documents were released where Cosby admitted to purchasing quaaludes to use on women in order to have sex with them.

Before noting that he's made it "a policy not to comment on the specifics of cases" that could still have criminal or civil issues attached to them, he said: "if you give a woman, or a man for that matter, without his or her knowledge, a drug, and then have sex with that person without consent, that's rape. And I think this country, any civilized country, should have no tolerance for rape."