Lindsey Graham: Hillary Clinton, Every Republican But Rand Paul, Would Have Got a Better Deal With Iran 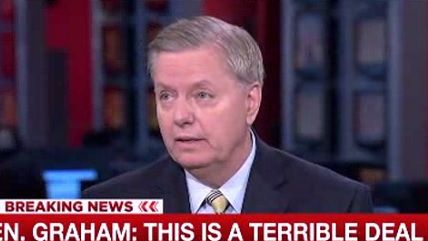 With the announcement of an Iran deal in the news, hawks like Sen. Lindsey Graham (R-S.C.), one of more than a dozen people running for the Republican nomination for president, have fallen back on comfortable talking points. By and large, they didn't trust any deal the Obama Administration was going to strike—even though such a deal would require the approval not just of the U.S. but of France, the United Kingdom, and the European Union as well.

Today, Graham declared that he believed Hillary Clinton, a candidate for the Democratic presidential nomination, and any of the Republican presidential candidates—except Kentucky Sen. Rand Paul—could have negotiated a better deal with Iran.

"Tell the P5+1 there is a better deal to be had," Graham told MSNBC's Morning Joe. "Hillary Clinton, if you think this is a good deal, then you're dangerously naïve. I think she could negotiate a better deal than this. I think everybody on our side could, except Sen. Rand Paul."

Graham, and other critics of an Iran deal, have never explained why they believed countries like the U.K, Germany, and France, all of whom face a greater threat from a militarized Iran than the U.S., would go along with President Obama simply to secure an end-of-term victory for his legacy.

Graham also acknowledged he was wrong in his assessment of the interim deal struck in April to get negotiators to this day. "I'd keep the interim deal in place because it has worked better than I thought,"  Graham said. "But if you close this deal out – if this becomes a binding deal, you've ensured a nuclear arms race and you've taken the largest state sponsor of terrorism on the planet and you've given them money to increase their terrorist activities."

Graham's position is informed by his politics, not his interpretation of reality. His line about anyone but Rand Paul doing a better job than President Obama is not new—he said the same in April, before the contours of a deal were known.

As Shikha Dalmia explained this morning, the deal struck with Iran is better than no deal—it delays Iran's nuclear abilities longer than any kind of military campaign short of a ground invasion could, and provides mechanisms to test Iran's adherence to the limits imposed on its nuclear program. Assuming the primary effect of the lifting of sanctions and the freer trade that comes with it is that Iran's government will have more cash is economically naïve.

Sanctions against Iran were not holding anyway with countries that have traded with Iran before—lifting them closes that black market and opens Iran's consumers to Western companies. And freer trade is a far more effective way to promote stability, security, and prosperity within the Iranian population, than sanctions and the threat of military force, which generally work best to reinforce the position of the Iranian regime and its stranglehold on the Iranian people and economy.