Arnold Schwarzenegger returns to his iconic role in this wasteland of a sequel. 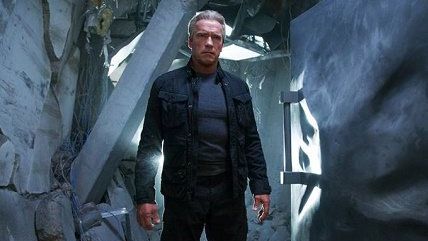 Stop me if you've heard this story. And please stop any more filmmakers from telling it again. You know how it goes: In a post-apocalyptic future dominated by genocidal Skynet computers, a cyber-assassin is dispatched back to 1984 to terminate one Sarah Connor before she can give birth to pesky John Connor, who has grown up to lead a post-apocalyptic human resistance movement. One of these resisters, John's lieutenant, Kyle Reese, is also dispatched into the past, to protect Sarah and to trigger the story's freaky plot.

This tale, first recounted in The Terminator, was effectively concluded by director James Cameron in his 1991 sequel, Judgment Day. Nevertheless, two non-Cameron sequels followed that one: the dumbed-down Rise of the Machines (2003) and the miserable Terminator Salvation (2009). Now, due mainly to rights-availability, we have Terminator Genisys, a movie that trashes the Terminator world with shameless time-travel mumbo jumbo, finessing one key event as a vague "nexus point," and non-explaining another with the news that "those files have been deleted." The picture also brings original Terminator Arnold Schwarzenegger back to the franchise, but please don't get your hopes up, writes Kurt Loder.