Sen. Rand Paul Wants Government Out of Marriage. Great! How?

Raises questions, but doesn't provide answers, even though he has some. 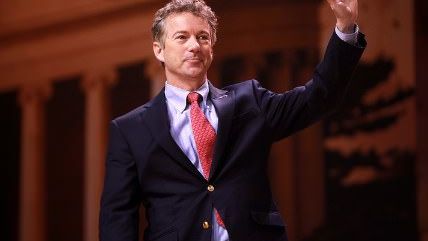 Sen. Rand Paul (R-Ky.) was not in the big mix of presidential candidates rushing to put out opinions in the immediate wake of Friday's Obergefell v. Hodges decision, which mandated legal recognition of same-sex marriages across the country.

But now he has a commentary up at Time. It's short on any sort of fear that gay marriage is a symptom of some sort of societal breakdown (something he's suggested when speaking to Christian conservative audiences). Instead he's appealing to libertarians by saying government should get out of marriage entirely:

The 14th Amendment does not command the government endorsement that is conveyed by the word "marriage." State legislatures are entitled to express their preference for traditional marriage, so long as the equal rights of same-sex couples are protected.

So the questions now before us are: What are those rights? What does government convey along with marriage, and should it do so? Should the government care, or allocate any benefits based on marital status?

And can the government do its main job in the aftermath of this ruling — the protection of liberty, particularly religious liberty and free speech?

We shall see. I will fight to ensure it does both, along with taking part in a discussion on the role of government in our lives.

Perhaps it is time to be more careful what we ask government to do, and where we allow it to become part of our lives.

Here's what frustrates me about Paul's argument. It's not that I don't agree with it, because I do, mostly. I think we can get marriage out of two of the three branches of government (even if marriages were to become private contracts, the courts will always be involved to handle disputes and intervene when needed on behalf of children). I'm frustrated that there's no actual meat to this argument. This is not a new position from Paul. He's argued this for quite some time.

For example, what about Paul's own flat tax proposal? He does not mention it at all in his Time piece. His plan would eliminate the complex income tax program we have now and replace it with a flat tax with standardized deductions and exemptions. Individual adults would have a $15,000 standard deduction and a $5,000 exemption. Parents would have an additional $5,000 exemption per child. There's nothing in his summary that indicates that marriage is a necessary component for the child exemption. So Paul's plan is an actual example of how—on the federal level—to get marriage out of government tax policies. But why didn't he promote this in his response? It helps make the libertarian case for less government involvement in a way that makes sense to most Americans.