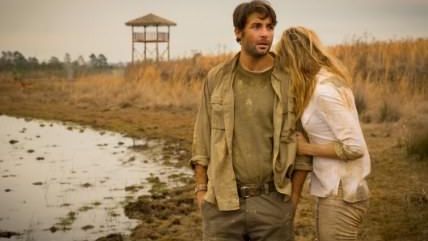 Those who do not remember the past sometimes leave a lot of cash on the table. For years, teenagers spent their summer nights at drive-in movie theaters, eating popcorn and watching movies like I Was A Teenage Werewolf.

Though the current generation of TV bosses doubtless includes some people who were the result of ancillary activities occurring in the back seats of those cars, it somehow never occurred to them to try the same strategy 10 or 12 years ago when they began trying to convert their summer schedules into something more profitable than a dumping ground for reruns.

But in 2013, CBS gave it a shot with what was supposed to be a limited-run mini-series adaptation of Stephen King's sci-fi novel Under The Dome. The ratings were so spectacular that the network junked the ending and turned the show into a full-blown series that returned last summer, along with a kissing cousin, Extant, in which astronaut Halle Berry returns from space mysteriously knocked-up. The cash registers jingled again, and lo, a genre was born: Summer Popcorn TV. Everybody seems to have a horror or sci-fi show this summer, from the killer kiddies of ABC's The Whispers to the post-apocalyptic mutants of Fox's Wayward Pines.

CBS, where the concept of overkill is unknown (four CSIs, three NCISs, two Criminal Minds and dread rumors of a reality version of The Beverly Hillibillies), has returned to the well yet again with an adaptation of Zoo, the 2012 novel by James Patterson and Michael Ledwidge. And despite its dubious literary parentage—Patterson doesn't compose books so much as manufacture them off an assembly line of ghostwriters, churning out as many as 13 a year—Zoo is a lot of good scary fun.

A combination of The Birds, When Animals Attack, and PETA revenge fantasies, Zoo's basic premise has the delicious simplicity of a Boy Scout campfire conversation: What if animals, after enduring eons of zoos, burger joints, and Yogi Bear reruns, decided they weren't going to take any more crap off the human race?

The first clues, in the best traditions of 1950s sci-fi, are spotted by a few renegade eggheads scattered around the world. In California, a fanatic anti-corporate blogger who thinks Big Pet Food is peddling contaminated lion chow to zoos teams up with a misanthropic veterinarian ("I like people, I just prefer it when they're not around") to look into the escape and subsequent all-you-can-eat-buffet behavior of two previously docile lions from a Los Angeles zoo. And in Botswana, a zoologist searching for a tourist photo safari that never returned to camp finds an abandoned home-video camera containing some unsettling images. Toto, I have a feeling we're not in Kansas anymore, and why are you looking at me that way?

Like any good popcorn production, Zoo moves at a brisk pace that leaves no time for overthinking any of its premises. (Are goldfish overturning their bowls? Are hamsters ripping their exercise wheels off the hinges?) The script is sprinkled with amusing asides: That Botswana zoologist uses James Brown CDs to scare big game away when hunters approach. And there's a workmanlike performance from the entire cast, including James Wolk of Mad Men as the zoologist, Billy Burke (NBC's post-apocalyptic Revolution) as the vet, and Kristen Connolly (House Of Cards) as the blogger.

If there's a breakout star in Zoo, though, it's probably the state of Louisiana, which does an astonishingly good impression of the African veldt that's used to excellent effect. Using little in the way of computer-generated effects, Zoo is a striking example of how much a talented director of photography can achieve with just his cameras. An aerial shot of four lions converging on their prey from different directions across a grassy savannah breathtakingly conveys in an instant something the characters couldn't sell you in a dozen scripted pages of chatter: These animals are coordinating their attack.

Nonetheless, a special word is probably due Connolly, who's establishing herself as the queen of Summer Popcorn TV—she's also in ABC's The Whispers as the clueless mom of a homicidal kid. As Zoo gets under way, Connolly's character is being fired from her newspaper job after her editor figures out she's writing a secret and unauthorized blog that regularly rips the corporation that owns the paper. The giveaway: the frequency of the word "pettifoggery" in both Connolly's copy and the blog. "I had to look it up," admits the editor. I don't know anything about lions, but when it comes to newsrooms, Zoo has a ring of anthropological authenticity.