Which States Have the Most Libertarians? This Map Will Tell You.

Montana and New Hampshire look promising, but most of the East Coast is a no-go zone. 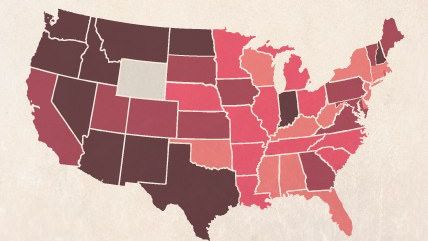 Trying to pick a new place to live where the locals are less predatory toward your personal liberty? Well, Jason Sorens of Free State Project fame has crunched the numbers so you don't have to. He examined voting patterns and political donations to detect concentrations of liberty lovers in these here United States. As he puts it:

To see which states have the most libertarians, I use six measures: Libertarian Party presidential vote share in 2008 and 2012, Ron Paul contributions as a share of personal income in 2007-8, Ron Paul and Gary Johnson contributions as a share of income in 2011-12, and "adjusted" Ron Paul primary vote share in 2008 and 2012. Ron Paul vote shares are adjusted for primary vs. caucus, calendar, number of other candidates, and the like.

This is no guarantee that laws and policies in your new digs will be to your liking (for that, look here). But you might find some new friends who will gripe about them with you.

Note: The measure is per capita, but Sorens specifies "it's all ordinal, not cardinal. I couldn't give you a precise count (MT has X many libertarians per capita), just a relative ranking of the states."