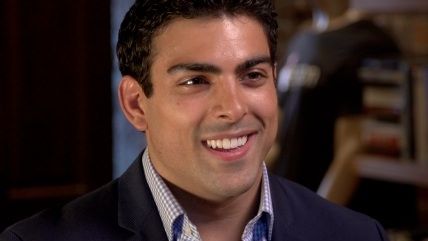 "A patent is a government-granted monopoly" that gives the owner sole right to profit from making or licensing a product, Khanna explains. "So effectively every week the government says, 'These are all the things that American citizens can't do for about the next 20 years.'"

Khanna's new paper, How to Fix Patents: Economic Liberty Requires Patent Reform, argues that patent policy and its abuse is failing to achieve its constitutionally enshrined purpose of "promoting the progress of the sciences and useful arts." This failure, he laments, has led to more monopolies and crony capitalism—the very  opposite of the free-enterprise system the founders sought to protect.

James Madison warned us 200 years ago to guard patents and copyrights with "strictness against abuse." Patent trolling, created and exacerbated by modern patent policy, is one manifestation of that abuse and is increasingly stifling competition, reducing innovation, and limiting potential economic growth. More than nearly any other instrument of government policy, getting patent policy right is critical to innovation and growing the economy.

If Americans want robust innovation and competition, then they must confront this cronyism in our midst and demand free markets and free competition without the government choosing winners and losers by granting patents for non-inventions. Less regulation will lead to more competition and more innovation.

Khanna recently sat down with Reason TV's Nick Gillespie to discuss patents, why you shouldn't be able to patent the shape of a cellphone and other obvious things, and why he believes the problems are reversible.