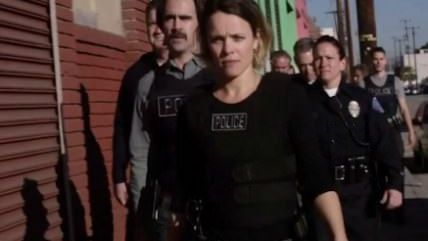 Upon learning that her ex-husband has punished a kid who's been bullying their son by beating his father senseless in front of the boy and issuing a truly breathtaking threat involving sodomy with a headless corpse, a character in HBO's True Detective reaches a profound conclusion: "You're a bad person."

This is a verdict that could be rendered on nearly everybody in the second season of the video noir True Detective, which debuts Sunday with a completely new setting and cast of characters. The good guys are bitter, emotionally blighted, morally untracked brutes. The bad guys–well, don't ask. If the first season was about two detectives seeking redemption for bad police work and personal betrayal, the new one is about a trio of cops searching for signs that they even belong to the human race.

They include Ray Velcoro (Colin Farrell), a detective in the perfidiously corrupt police force of a decaying Southern California industrial city called Vinci, whose perpetual drunkenness and unfathomable crookedess have wrecked his marriage and driven away his son. The eremitic Ani Bezzerides (Rachel McAdams), a sheriff's deputy in nearby Ventura County, is the final survivor of a New Age do-what-you-will family whose other members have drifted into jail or suicide. And remote CHP motorcycle cop Paul Woodrugh (Taylor Kitsch, memorable as a sullen young high school fullback in Friday Night Lights) closely guards a secret from his military service in Iraq.

The three, each with a long trail of domestic wreckage and professional anomie, are tossed together in a makeshift task force necessitated by the odd circumstances surrounding the murder of the city manager of Vinci. The murder is so obviously linked to official malfeasance that Velcoro asks his bosses: "Am I supposed to solve this or not?" And the answer is abundantly unclear, with each police agency trying to pin something on the others as they all pursue hidden agendas. As the cops begin to realize that they're all potentially sacrificial pawns, they draw together in spite of their misanthropy.

True Detective is television's most purely auteur production, conceived and almost entirely written by novelist Nic Pizzolatto (who also did a brief turn on another noir crime series, AMC's The Killing.) Its second season, no less than its first, is a vehicle for his peculiar worldview, a murky stew of nihilism (at Velcoro's favorite bar, the nightly entertainment is an atonal burnout whose lyrics run along the lines of "this is my least favorite life") and zen morality ("my strong suspicion is, we get the world we deserve," observes Velcoro at one particularly bleak moment).

Pizzolatto's writing is not without its irritations, particularly his dialogue. It ping-pongs between baroque–"Dualities must be affected to serve the public interest," says a senior police officer by way of explaining the investigation has to be tanked–to what might be called existentially minimalist, full of cryptic grunts, portentous silences, and unanswered questions.

Coupled with the relentless desolation of Pizzolatto's zeitgeist, it can sometimes make watching True Detective feel like a bit of chore. Ultimately, the characters are too fascinating to turn loose of–particularly Farrell's explosive Velcoro and his political godfather Frank Semyon, a gangster whose attempt to leave the bare-knuckle stuff behind for a big score as a developer is threatened by the murder investigation.

Nicely played by in an unexpected dramatic turn by erstwhile comic actor Vince Vaughn, Semyon is an epic portrait of rage and despair as he sees a lifetime of earnest criminality being swept away by a collection of failed cops too dim to comprehend they've been selected for their incompetence. Lying in bed on yet another sleepless night, Semyon spots a leak in his new ceiling and sees it as a metaphor for his entire sketchy existence: "It's all papier-mâché." And in True Detective, a hard rain is always about to fall.

If you're feeling bummed after True Detective (and if you're not, you probably belong on a TSA watch list), you can find comic relief of a sort with The Brink, another HBO premiere the same night. A cross between Dr. Strangelove and Showtime's spy thriller Homeland, it stars Tim Robbins as a priapic secretary of state caught between his desire to save the world from a nuclear crisis in Pakistan and his fervent wish to bone Asian hookers. "This job sucks ass," he complains to an aide. "I should have asked for Interior. No one's gonna take you away from a hooker in the middle of the night to save Mount Rushmore."

Robbins' accidental allies in his attempt to defuse the crisis are Jack Black as a party-boy junior diplomat in Islamabad and Pablo Schreiber (Orange Is The New Black) as an opiate-addled Navy pilot on an aircraft carrier in the Red Sea. Hijinx ensue, from an accidential missile attack to, well, who knows. The manic Brink can be exhausting and overbroad, but it also has moments that are acutely, if childishly, funny, as when a meeting in the White House situation room erupts in a long round of "Fuck you! No, fuck you!" between the secretaries of state and defense, capped by the inevitable, "Well, he started it!" when a glaring president intervenes. And if you contemplate the current arguments in Washington over whether to bomb Syria or Iran, or Syria and Iran, The Brink can also seem like chilling neorealism.