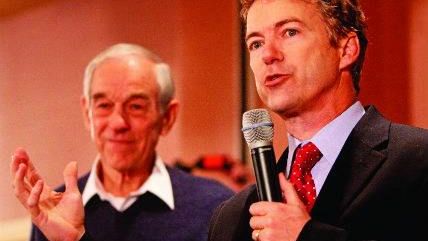 Rand Paul is campaigning for president as a different kind of Republican. Since entering the U.S. Senate in 2011, he has staked out unorthodox positions on foreign policy and civil liberties, rejecting what he and many of his fans see as recklessly interventionist militarism. The GOP brand, he wrote in his 2011 book The Tea Party Goes to Washington, has become "tainted by neoconservative ideology."

But in the run-up to the Kentucky senator's April 7 announcement that he was officially running for president, Paul engaged in a series of rhetorical and parliamentary maneuvers that left many anti-interventionists openly worried about a politically inspired foreign policy drift. Many of Paul's once and future supporters would like to stand with Rand. But it still seems to be an open question exactly what kind of foreign policy, and what specific interventions, a President Paul might pursue. And, as Brian Doherty explains, that may well be exactly the way he and his campaign want it.