To write tickets for littering and other sidewalk "crimes" 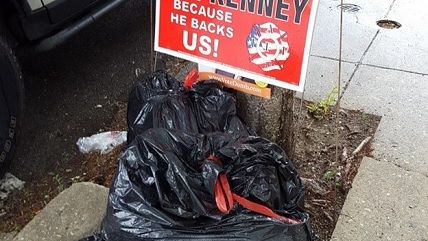 Jim Kenney, the Democrats' nominee for mayor of Philadelphia, a city where Democratic voters vastly outnumber Republican ones, has suggested expanding the jurisdiction of the Philadelphia Parking Authority—which already regulates, for example, taxis and limos operating in the city—to include things like littering, construction, and other sidewalk-related regulations.

Kenney is, at least, refreshingly honest about the motivations behind this. Via CBS Philadelphia:

"We have people out there working for the public, and have the ability to interact with these folks who can generate more revenue for schools and for city services, then we should look at the possibly of utilizing them," said Kenney.

Kenney, incidentally, was the driving force in the city council in getting marijuana decriminalized in Philadelphia last year. In negotiations with Michael Nutter, the current mayor of Philadelphia, it was Nutter, not Kenney, who pushed for additional fines for public consumption of marijuana. Kenney's original bill had only a $25 fine for possession of up to 30 grams of marijuana. A $100 fine was added for public consumption of marijuana to win Mayor Nutter's signature. Even when politicians say they want to decriminalize marijuana, they want to reserve their right to keep interfering in people's lives over it.

Importantly, such petty law enforcement, which focuses on revenue collection not imprisonment, can trap people, especially the poor, in a criminal justice cycle that ends in jail anyway. The treatment of resident infractions as potential sources of revenue is an often overlooked aggravating factor in the problem of police violence across the country.