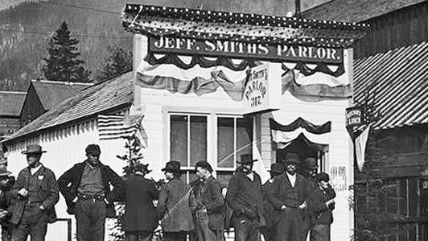 Like many boomtowns of the 19th century West, where the discovery of precious natural resources on ungoverned land caused explosions of economic development and population growth, Skagway, in what was then the District of Alaska, was for a time a virtually anarcho-capitalist republic, a working-class libertine haven, and a seat of women's power. But as with many Western boomtowns, the eventual exhaustion of the resources combined with invasions by moral and governmental authorities to end the dreams of the men who came to Skagway with pickaxes, gold pans, and a thirst for the good life. They also pushed some of America's wealthiest and most independent women onto the streets, into jail cells, and mired in poverty. Thaddeus Russell reviews Saloons, Prostitutes, and Temperance in Alaska Territory, independent historian Catherine Holder Spude's book on the rise and fall of gold-rush Skagway.