Elizabeth Nolan Brown in Playboy (Not Like That) on How We'll Soon Send Money Quickly, Anonymously, and From Anywhere

Historically uncool QR codes are poised to be a main driver of anonymous e-payment. 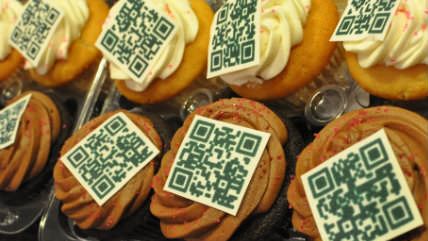 Though it's been around for a while, QR code technology has yet to really catch on with American consumers. But that might finally be changing, as its deployment by the likes of Snapchat, WalMart, and bunches of Bitcoin users is beginning to make QR codes more ubiquitous. If so, it could be good news for small businesses, political activists, sex workers, fundraisers, fringe groups, and anyone interested in sending funds quickly and anonymously with ease.

The versatility of QR codes is a big part of their appeal, as I explain in a new piece at Playboy:

A code can be scanned and read from a TV broadcast or a YouTube video, a business card, a Twitter profile, even a necktie. At the Netherlands' Modez Hotel, one room is outfitted in QR code wallpaper, drapes and furniture, with each code linked to a bit of erotica, a sexy photo or an adult film clip.

Vodafone Romania has created customizable adhesive wallpaper that doubles as a digital library. After selecting which books they want on the "shelves," customers simply scan a QR code built into each image to access a digital copy. … In 2013, a student at Alabama's Auburn University held up a poster with a QR code for his Bitcoin account on a live ESPN broadcast. He was anonymously gifted about $24,000 worth of the cryptocurrency.

[…] Activists could add QR codes to protest signs, thereby enabling anyone who sees the activity via TV, Twitter or wherever to donate to the cause. ChangeTip recently raised funds for Nepalese earthquake victims by soliciting Bitcoin donors. Disaster relief funding this way can help circumvent corrupt governments that would otherwise seize or misspend funds. … A handful of strip clubs, escort agencies and other adult-oriented businesses already accept Bitcoin payments, which come with the advantage of not showing up on customers' bank statements or credit card bills. And for those working in the sex industry, it allows for less reliance on banks and PayPal, which are notoriously hesitant to do business with even legal adult trades.

Of course, government regulators could ruin everything:

In 2014 the Chinese government banned QR code payments entirely. U.S. lawmakers have largely been silent on this front, though they're plenty anxious to exert some control over cryptocurrencies.

North Carolina is considering regulating Bitcoin processors as "money transmitters," thus requiring them to be licensed by the state and submit to a slew of new (and expensive) regulations. New York is planning "BitLicense" rules for virtual currency exchanges. In New Jersey, state tax officials are making retailers who accept Bitcoin collect double the sales tax (effectively killing the cheaper-payment-processing advantage of Bitcoin).

Whole thing here. I'll refrain from making a "for the articles" joke, as I think everyone got those out of their system with Jacob Sullum's Playboy piece from earlier in the week ("How to Tell When the Latest Drug Scare Story Is Just the Usual BS").