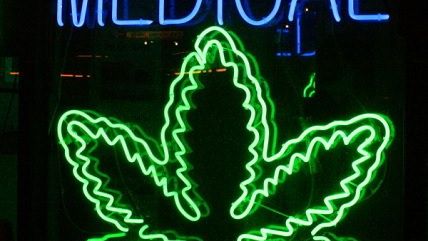 California authorities are notoriously creative when it comes to wringing as much tax revenue as possible out of the state's businesses, yet are leaving real money on the table because of their failure to come up with a simple way for medical marijuana dispensaries to pay their tab.

Voters legalized this business 19 years ago with the passage of Proposition 215. But an uncertain federal legal status has complicated the matter since then. The state only collects a small percentage of the sales-and-use taxes these businesses owe, although a new program is attempting to address the imbalance.

"Because of federal law, people in the cannabis industry aren't allowed to have bank accounts," said George Runner, a Republican member of the Board of Equalization, a state tax-collection agency. "Cash-based businesses are very hard for the BOE to audit. If we can't analyze a bank account, we can't accurately audit a business."

Because of federal law, dispensaries risk having their assets seized if they put them in an account. The result is bizarre: "It's a huge safety risk to have dispensaries pay their taxes by carrying duffel bags into BOE offices with hundreds of thousands of dollars in cash," he added. Runner called on the federal government to legalize bank accounts, which is more important now that California has banned such cash payments.

Earlier this month, the board developed the "Cannabis Compliance Pilot Project" to determine the degree of noncompliance with tax rules, the amount of lost revenue and the volume of marijuana produced in the state. The agency will come up with strategies to hike tax compliance for growers, distributors and retailers.

The goal is to create "a living document that allows flexibility to adjust as new needs are identified, such as legislative and/or regulatory changes, along with ballot initiative(s) related to the cannabis industry." In plain English: The Board of Equalization expects voters to eventually legalize the recreational use of marijuana and wants a solid tax plan in place by then.

In 2012, Washington state voters passed an initiative legalizing the sale of recreational marijuana. Colorado voters also legalized pot in 2012. Two legalization measures have been filed with the California attorney general's office for the November 2016 ballot. If enough signatures are gathered, we will see a statewide campaign here, too.

Runner is opposed to the legalization of marijuana for recreational uses, but his approach could create a boon for supporters, who can point to a tax bonanza for what some say is the state's largest cash crop. Other research suggests that common claim about the size of the industry is exaggerated, but it is a big industry with an untapped tax potential. Tax proceeds have lagged predictions in Washington and Colorado, but that's likely the result of the same bank-account issue that's hobbling medical-marijuana collections here.

The Board of Equalization's pilot project could come up with some realistic numbers that almost certainly will bring smiles to the faces of Department of Finance bean counters. (State officials might also want to analyze any cost savings if recreational marijuana use goes from a law-enforcement matter to a taxable industry.)

Some California cities have passed rules essentially banning those dispensaries (by, say, requiring them to comply with federal laws, which don't allow their operation) — but they might have a change of heart if they see a tax benefit. Once the government figures out a way to tax a business, it's less likely to crush it.

It took nearly a decade after Proposition 215's passage before the state decided dispensaries were not illegal and implemented a sellers' registration policy to help encourage tax payments. The board says it even allowed "taxpayers to 'decline to state' the type of tangible personal property sold to reduce the risk of self-incrimination." But payments were rare.

It took another decade for the board to research ways to increase tax compliance from people who aren't allowed to pay by cash — but aren't allowed to have a bank account, either. Federal rules may be to blame, but it's hard to understand such slow progress given how many millions of dollars are at stake.