WATCH: Mitch Daniels on How to Cut Government & Improve Services

The former Indiana governor and current president of Purdue University gets real about making the public sector cheaper - and better. 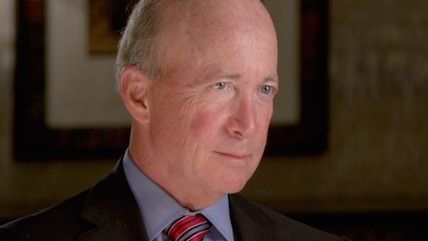 The story originally appeared on May 19, 2015. The original text is below:

Former Indiana Gov. Mitch Daniels served in office from 2005 to 2013 and in eight short years accomplished more than most politicians manage in a lifetime. He turned deficits into surpluses, ended public-sector collective bargaining, reduced the state work force by 18 percent while improving services, and leased the money-losing Indiana Toll Road for an upfront payment of nearly $4 billion. Currently president of Purdue University, he has managed to freeze tuition while other public and private universities routinely increase annual costs by double digits.

In May, Daniels became the first recipient of the Reason Foundation's annual Savas Award for Public-Private Partnerships, which is awarded to policymakers with outstanding legacies of improving the delivery and effectiveness of services while reducing the cost and scope of government.

Reason magazine Editor in Chief Matt Welch interviewed Daniels in New York City shortly before the award was presented. Among the topics covered: How Daniels cut the public-sector work force in Indiana and ended collective bargaining without much controversy; the surprising, bipartisan pushback on leasing the Indiana Toll Road; his challenges and plans for Purdue, including an ongoing tuition freeze; runaway spending by Republicans during the Bush years; the need for old-age entitlement reform and reduction in national debt; and more.

About 30 minutes. Go to https://reason.com/reasontv/2015/05/19/mitch-daniels for a full transcript of the interview, downloadable versions, links to related resources, and more.

Joshua Swain was producer for “Stossel on Reason.” Prior to his current position, he was a producer for Reason TV. A Virginia native, he attended George Mason University and currently lives in New York.