The public will decide, and polls indicate they'll say yes. 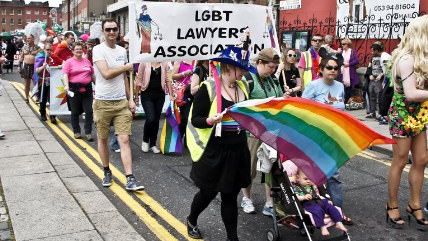 Voters on Friday will take to the polls in Ireland for a special referendum to legalize recognition of gay marriage. The Catholic Church is telling its members to vote no (some priests, though, are recommending otherwise). Politicians and celebrities (Bono!) are telling citizens to vote yes. From The Guardian:

Ireland's prime minister, Enda Kenny, has made a final plea for a yes vote in the referendum to legalise gay marriage.

The taoiseach told the Irish electorate on Wednesday night: "There is nothing to fear for voting for love and equality."

Kenny made his plea on live television ahead of a broadcasting embargo imposed on all sides of same-sex marriage debate.

Yes, so now apparently everybody has to shut their mouths on gay marriage in Ireland. Their laws forbid public statements on all sides of the issue starting 24 hours prior to the election. They should have a referendum to get rid of that censorious regulation.

Ireland does currently have a civil partnership system for same-sex couples, implemented in 2010, but it lacks some of the same legal recognitions and protections as marriage there.

Should Ireland voters approve same-sex marriage recognition—and polls indicate that they will—Ireland will be the 19th country to legalize it, but the first to do so through a public vote. It's a sign of how quickly public attitudes have changed on gay acceptance. Ireland struck down anti-sodomy laws back in the 1990s (which is still about a decade earlier than the Supreme Court followed suit in the United States). It took only 20 years to get from threatening to put gay people in jail to legally recognizing their relationships.

I would make a tacky, predictable joke about the Lucky Charms leprechaun marrying Captain Crunch or something, but General Mills itself beat me to it two summers ago with an ad campaign to coincide with gay pride celebrations.