What Did U-M Coach Jim Harbaugh Say to Offended Students? I Was Kicked Out of the Meeting.

Discussion between Harbaugh and students conducted behind locked doors. 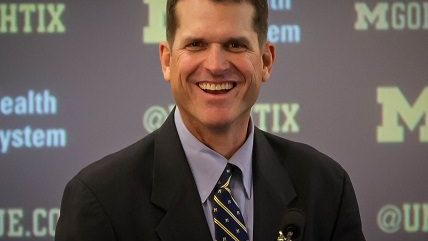 University of Michigan Head Football Coach Jim Harbaugh met with about two dozen Muslim and Arab students today—supposedly to make amends for speaking out in favor of showing American Sniper on campus a few weeks ago. I attended the meeting, but was forced to leave when Harbaugh arrived. Insisting the meeting was "private," administrators then barred entry to the press and anyone else not on a preapproved list.

Did Harbaugh apologize to the students? I don't know. After 1 hour and 30 minutes, the room opened and everyone left. I asked nearly every person to comment, but all of them—including Harbaugh himself—refused.

The event was initially advertised as one in which Harbaugh would "be issuing a private apology to Middle Eastern, North African, Muslim, and South Asian students," according to an email sent by student activist Lamees Mekkaoui, who spearheaded efforts to get the American Sniper screening cancelled last month. Harbaugh had tweeted in support of screening the movie:

"Michigan Football will watch "American Sniper"! Proud of Chris Kyle & Proud to be an American & if that offends anybody then so be it!

Administrators eventually decided to screen American Sniper, but also showed the comparatively tame Paddington as an alternative for offended students.

After informing her fellow activists that Harbaugh would be apologizing, Mekkaoui sent a follow-up email clarifying that she had been mistaken:

I would like to make a correction in my email. I made the mistake of assuming that an apology would be issued. However, Coach Jim Harbaugh was simply invited to a private meeting with us in order to talk about the screening of American Sniper and get a dialogue going about how a university leader's social media can impact campus climate.

The meeting was held in a classroom-sized room in the student union. I arrived early, but waited outside the door until Harbaugh appeared with a university photographer and another administrator. I then followed them inside and took a seat. A student organizer asked me to identify myself, and instructed me to leave after I revealed that I was a journalist. I asked to be allowed to just listen-in on the conversation, but Harbaugh's people insisted that the event was private and closed to the press. I appealed to Harbaugh himself, but he wouldn't meet my gaze. Once it was clear there was nothing I could do to remain in the room, I left.

After that, the entrance was barred to anyone not a preapproved list—including student reporters with The Michigan Daily, who turned up a bit later.

I was then approached by a middle-aged-woman who had access to the meeting. She asked me if I needed her help, so I repeated my request to sit in. She explained that that was never going to happen and asked me whether I had taken any pictures. Indeed, I had—though only of Harbaugh, before he entered the room. The woman asked me not to take any more pictures and asserted that I was making the students "unsafe."

After it was over, I followed Harbaugh down the hallway: He repeated several times that the meeting "went great," but wouldn't say anything else. Event organizers also declined comment. University Public Relations Director Rick Fitzgerald told me that the meeting was always intended to be private. A Michigan Daily reporter asked him whether there were any ulterior reasons for the incredible secrecy; Fitzgerald reiterated his stance.

The students were clearly coached not to speak to the press; none would answer any questions about what had transpired. The Michigan Daily reporters appeared to have no more luck than I.

I don't dispute that the students have every right to conduct a private meeting, though I can't help but wonder what purpose such militant secrecy serves. Did the perpetually offended campus left just deal Harbaugh his first defeat as Wolverines head coach—months before the season even begun? Or did he defend himself? We may never know.

For more on the American Sniper controversy at UM, read my exclusive report on an act of vandalism perpetrated by a liberal Muslim student leader.