I Voted for Milton Street for Philadelphia Mayor Today

Philly Democrats essentially voting for the next mayor today 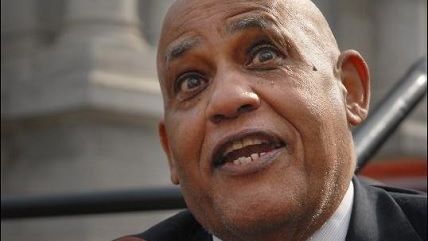 I went and voted in the municipal primaries today in Philadelphia, where I'm registered as a Democrat*. The race at the top of the ballot was actually one of the judge's races, but the most prominent race was for mayor, where former Councilman Jim Kenney, a long-time supporter of the police union who was also one of the political forces behind decriminalizing marijuana, appears poised to win the Democratic primary and thus also November's general election in this predominantly Democratic city.

While Kenney secured the endorsement of the Fraternal Order of Police, he was one of the only candidates who said he wouldn't fire the police commissioner, Charles Ramsey, who has had a contentious relationship with the union on account of wanting to fire more shitty cops than the union is comfortable with.

The other major contender is state Sen. Anthony Hardy Williams, who likely uses his middle name professionally because his father, Hardy, was a long time state legislator out of Philadelphia too. Williams has long been a supporter of the city's charter school system, which is widely popular in the city's poorer, mostly black, neighborhoods, but it doesn't look like it's going to be enough support for him to win today. Kenney, in fact, could become the first white mayor ever to win the primary with more black votes than any of his black challengers. At least one local columnist suggests Williams' naked racialist appeals could have ended up costing him black votes.

Lynne Abraham, the former district attorney, may have been a serious contender but plummeted in the polls after the 74-year-old fainted during a televised debate.

I voted for none of those candidates. Instead I voted for Milton Street, because it's not often you get such a perfectly cromulent protest vote on the ballot. Street represents everything wrong with contemporary politicians and he owns it all.

This profile from Philly.com makes the case for Street as well as anyone could. Read:

First, Street is a serial prevaricator, who lies early and often. This week, for instance, as he faced a court challenge based on his residency and flaws in his nominating petitions, he testified on a Friday that he was married to a woman who lives in Moorestown, and on Monday testified that he was not. He said he had mailed in a change of registration form switching from independent to Democrat but no one at the Election Bureau ever saw it.

The truth is he does live in New Jersey—or did until a few months ago—and he did not mail in his change form, but Judge Chris Wogan gave Street the benefit of the doubt and let him stay in the ballot. (Wogan should know better than to give Street any benefit of any doubt.)

Second, if there ever is a Tax Deadbeat Hall of Fame, Street would be one of the first inductees. The list of taxes he has owed and tax liens on his properties is a long one. The capstone of his career came in 2008 when he was found guilty in federal court for failing to pay taxes owed on close to $3 million he earned early in the decade as a "consultant."

He served his time at a federal prison in Kentucky. It was one of the few times we knew for sure where Street resided.

At his trial, Street's defense was that in his search of the law books he found no clause that gave the Internal Revenue Service the right to collect taxes. The judge showed admirable restraint by not laughing when he ruled against Street's assertion.

Third, as to that "consultant" stuff, Street's glory years—in terms of income—were when his younger brother, John, was mayor (2000-08). He got a contract to run the food concessions at the River Rink ice skating rink. Later, Penn's Landing Corp., which ran the rink, had to take him to court to collect vendor fees he owed.

In 2001, Street worked as a consultant for a Texas company that got a big contract at Philadelphia International Airport. The firm kept him on as a $30,000-a-month consultant after it got the deal to handle maintenance at the airport worth up to $3.2 million.

In gratitude for that sweetheart deal, Street tried to get the contract for himself in 2003.

During the same period, Street formed a company called Notlim (Milton spelled backward), which went after the airport contract and also offered his services as a consultant to help clients get access to the mayor. His brother put the kibosh on that plan, but Notlim still exists as a company. (If elected mayor, maybe he will reactivate it and offer his services as a consultant to gain access to himself.)

In 2007, when running to replace his brother, Street once said he'd quit if he couldn't get 5,000 people to show up at a rally. Only 200 people showed up, but Street said he had vastly underestimated his own commitment to the campaign. He ended up not qualifying to run because he hadn't lived in Philadelphia long enough at the time. He's been polling consistently in the single digits this time around.

Related: The Libertarian Case for Voting and Your Vote Doesn't Count

*as I explain each time I do a post like this, I register Democrat because I live in a predominantly Democrat city with closed primaries so I like to keep my options open. I don't think I saw a single competitive election on the Republican primary side.