Obama Administration to End Some Military Equipment Transfers to Police

Grenade launchers are out, but police will still be able to get armored vehicles. 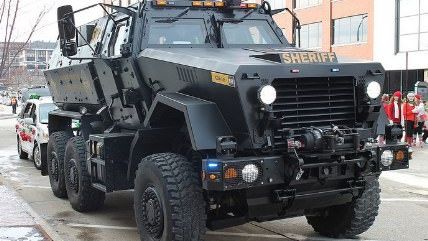 What do you know? President Barack Obama actually does care about police militarization.

Last year, following the outrage over the militarized police response by protesters in Ferguson, Missouri, the Obama Administration put together a task force. This task force was to examine police policies across the country and come up with recommendations to address that many folks are unhappy with the increasingly volatile and explosive power given to law enforcement.

When some of the initial reports came out, I dinged the administration for failing to truly engage in the problem that it's the federal government providing all this militarized equipment for law enforcement agencies. The initial reports call for more oversight of the federal programs but failed to call for any scaling back of the transfer of armored vehicles, grenade launchers, and other surplus military weaponry to law enforcement agencies.

Today, that changed. A new set of recommendations requested by the president will end the transfer of certain types of military equipment to law enforcement agencies and restrain some others.

Here's what will now be forbidden (and this is going to be taking place immediately once the president accepts this new report): tracked armored vehicles, any weaponized vehicles or aircraft, bayonets, grenade launchers, large caliber weapons and ammunition (greater than .50-caliber), and camouflage uniforms.

Note what is not on the forbidden list: wheeled armored vehicles, like those familiar Mine-Resistant Ambush Protected (MRAP) trucks and other military vehicles. They will be on the "controlled equipment list." Law enforcement agencies (other than those who solely serve schools) will be able to get these vehicles and other types of military equipment, but the agencies will have to "take additional steps to acquire this equipment, including the submission of a detailed justification outlining their need for procuring the equipment." In other words: another layer of bureaucracy.

And of course, the new report calls for more training and a federal bribe to the tune of $163 million in grants to try to get law enforcement agencies on board.

What else is interesting is that the president will be announcing all this today at a visit to Camden, New Jersey, where he'll be talking about how reforms to the police department there has improved its relationship with the community. From USA Today:

Obama previewed Monday's speech in his weekly radio address Saturday, saying he chose the New Jersey city because of the progress it's already made.

"I'll highlight some of the innovative things they've done to help police do their jobs more safely and reduce crime in the process," Obama said. "And I'll highlight steps all cities can take to maintain trust between the brave law enforcement officers who put their lives on the line, and the communities they're sworn to serve and protect."

Apparently Camden County Chief Scott Thomson gave testimony on improving community-based policing for these reports. Note, he's the county chief, not the police chief for the City of Camden. That's because the City of Camden dumped its expensive, ineffective unionized police force and contracted out with non-union county protection in 2012. The change actually increased the number of officers working the streets and, as Ed Krayewski noted in 2013, led to a significant drop in crime. But I wouldn't expect Obama to be calling out police unions as the problem.

Also, just because Obama is going to set up these new procedures absolutely does not mean members of Congress don't need to pass legislation making the transfer bans a formal law. Executive policies like this can be undone later on, quietly, without nearly as much public attention.