Lindsey Graham Running for President, Because He Thinks 'the world is falling apart' 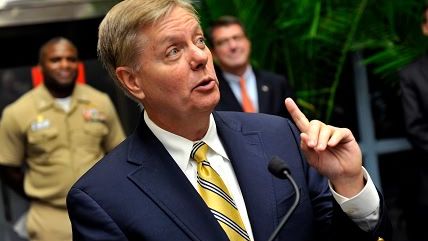 Sen. Lindsey Graham (R-S.C.) is going to be running for president. He's hinted at as much over the last several months, but appeared to confirm it while nailing down the raison d'etre for his campaign in an interview with CBS. "I'm running because I think the world is falling apart," he said.

The tack is nothing new for Graham, who has been somewhat of a John McCain clone since entering the Senate in 2003. Graham's previously supported immigration reform, though of course he wanted something out of it, and worked with Democrats on issues like climate change. He hasn't gotten the "maverick" label from a barely attentive media the way McCain did largely because Graham's defined himself with his stance on foreign policy far more than McCain ever has.

Graham, and other interventionist Republicans looking to run primarily on a campaign of foreign intervention, have already affected the presidential race, pushing the smaller, less interventionist side (comprising of Kentucky Sen. Rand Paul and maybe someone else?), toward more intervention.

Graham's done this while claiming he's into libertarian ideas and that his only differences with libertarians are tactical. In the past Graham's suggested using the military to force Congress to stay in session until they increase military spending. That idea isn't libertarian, democratic, or republican. That it doesn't disqualify a Republican from being treated as a relatively serious presidential contender says a lot about how deluded the Republican base still is on issues of foreign policy. It helps put the recent fumbling over the Iraq War in perspective: Republican candidates don't know how to engage the issue because while most Americans have to come realize it was a mistake, much of the GOP base, which will be selecting the candidate the rest of us are then going to have as the main Hillary Clinton alternative, has not.

Rand Paul's possible rightward lurch on foreign policy, seeming to abandon a non-interventionist, anti-war strain that once ran strong on the right, could be another barometer of how disconnected the GOP base is from the wider American population on issues of war and peace. Unfortunately, Obama's relative popularity on foreign policy, especially from a left-wing base that professed to be anti-war in 2008, shows there's also cognitive dissonance among Americans who say they support a less interventionist foreign policy. Republicans treating Obama like some kind of through-and-through non-interventionist, when he's done a lot of the difficult work in mainstreaming Bush era foreign policy adds to the political fog.

And while Paul may be tempering his message of non-interventionism and cautious foreign policy in a bid to attract base Republicans, Graham has not had to think about tempering his message of aggressive interventionism. Today's comments about running for president come after Graham commented this weekend that he would use a drone on anyone "thinking" of joining Al-Qaeda and ISIS, crossing a line Paul helped draw in 2013 when he led a 13-hour filibuster on the issue of whether drones could be used against U.S. citizens without due process—Paul was against it and it helped build him some bipartisan popularity, especially among younger people. But Lindsey Graham believes he has scared Republicans he needs to appeal to to remain a serious contender in the growing Republican presidential field.