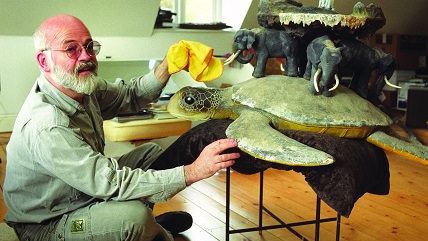 Terry Pratchett may not have been the first writer to personify Death as a walking, talking skeleton tasked with reaping the souls of the living, but he was the first to give him a horse named Binky and a granddaughter named Susan.

This Death was no less efficient or inevitable despite all the whimsy, of course. As various characters in Pratchett's long-lasting, wildly popular series of fantasy novels passed on, Death traveled across Discworld—a flat planet resting on the backs of four elephants who stood on a giant turtle that swam through the universe—to ferry the newly deceased to whatever came afterward.

So it was highly appropriate that after Pratchett's death at age 66 on March 12, following a long and deliberately public faceoff with early-onset Alzheimer's disease, the novelist's official Twitter account described his passing as Death gently escorting Pratchett from our rounder, less turtle-dependent world, writes Scott Shackford.