Steve Chapman on the Democrats Who Have Abandoned Free Trade 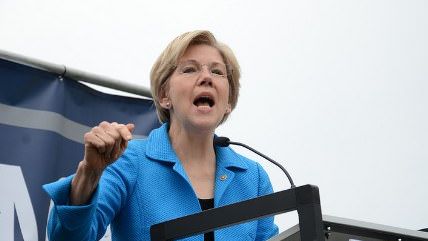 For a long time, there was a bipartisan consensus for free trade. President George H.W. Bush, a Republican, negotiated the North American Free Trade Agreement, and Democrat Bill Clinton got it passed. It prevailed in the Senate in 1993 with the support of 27 Democrats and 34 Republicans. The consensus wasn't unanimous by any means, but it was broad enough to steadily advance the cause.

Tuesday's Senate vote against considering a bill to give President Barack Obama "fast-track authority" for trade deals suggests those days are gone. Only one Democrat supported it, with 42 opposed—led by Elizabeth Warren, D-Mass. Economic anxiety, hostility to foreigners, resentment of large corporations and distrust of Obama—in both parties—have dissolved the old coalition. Steven Chapman observes that even Hillary Clinton is on the fence.