'On several occasions during the exam... breaking down and crying' 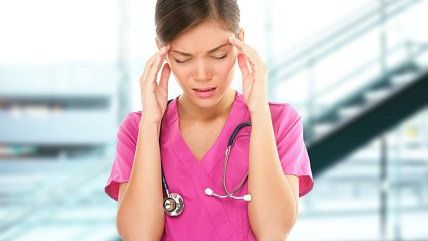 Brace yourselves for what might be the frivolous higher education lawsuit of the century: Misericordia University nursing student Jennifer Burbella is suing the school, the nursing department, and professor Christina Tomkins for failing to accommodate her disabilities in violation of federal law.

What's wrong with Burbella? It's not exactly clear, but she suffers from crippling depression and anxiety, according to thetimes-tribune.com. Her mental health issues were so debilitating that she struggled throughout her four years at the Dallas, Pennsylvania-based private university and twice failed a required class for her nursing degree. Her lawsuit claims that she received no special accommodations the first time she took the class, but things were quite different the second time: She was given permission to take the exam in a separate "distraction-free" environment; she also received extra time.

Burbella's suit claims that the professor, Tomkins, offered to answer questions during the exam, but when Burbella called her on her cell phone, she didn't answer. This created even greater panic for Burbella, and she again failed.

She is demanding unspecified damages in excess of $75,000.

I have no doubt that Burbella's anxiety is very serious, and I hope she gets the help she needs. It's good that she was using the university's counselling services, and I can understand making some accommodations for her.

But… she's going to school to be a nurse. Being a nurse is a very stressful job. Nurses have to deal with people who are in incredible pain, who are making unreasonable demands, who are completely helpless, and whose very lives are dependent upon quick and efficient care. My sister-in-law is a nurse; she's great at her job, probably because she has the most serene demeanor of anyone I've ever met. Literally nothing fazes her.

It seems like everything fazes Burbella. That's a real problem for her—and again, I hope she gets the help she needs to address it—but it seems like maybe (just maybe) she isn't cut out to be a nurse, if she can't pass the final exam without the professor walking her through it. That seems like a rather different accommodation than, say, letting a blind student take an oral exam instead of a written one. Certainly, Misericordia shouldn't be obligated to give Burbella the university's stamp of approval.

Burbella's lawsuit is an extreme case, but it seems like more and more students these days want university administrators to hold their hands throughout their four years on campus. Students demand protection from ideas that offend them—rather than overcoming disagreement, they expect to avoid it in the first place. They think they should be warned ahead of time when a classroom topic is bound to upset them, and excused from engaging it.

This kind of accommodation is bad enough when it happens during literature discussions. But what happens when universities start graduating lawyers who missed tough lectures on sexual assault law, or nurses whose severe anxiety granted them special exemption from the kinds of stressful situations nurses are expected to deal with on a daily basis?

One more thing: Misericordia? I've never heard of it before, but the name alone is triggering to me. It's "misery" and "discord" all rolled into one. Who founded this place? Franz Kafka?