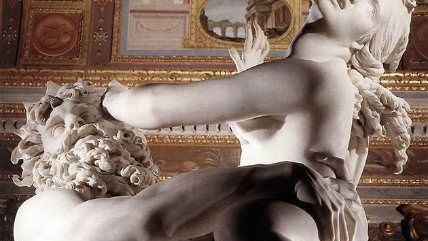 In Columbia University's student newspaper, four members of the school's student Multicultural Affairs Advisory Board call on professors to be more sensitive when teaching provocative or controversial material… such as the Roman classical poet Ovid.

Ovid is best known for The Metamorphoses, a 15-book narrative poem that covers more than 250 mythological stories. Written entirely in dactylic hexameter, The Metamorphoses inspired future writers from Dante to Chaucer to Shakespeare. Whether or not it's something today's students should spend time on may be up for debate, but I think most people can understand why an instructor teaching it would focus on things like the language and imagery invoked.

Not these Columbia students, however. See, some of the myths Ovid recounts involve sexual violence. Zeus' daughter Persephone (aka Prosperina), for instance, is kidnapped, raped, and taken as a bride by Hades, king of the underworld. The op-ed writers suggest this ancient Greek and Roman myth is too triggering to be taught in today's classroom:

During the week spent on Ovid's "Metamorphoses," the class was instructed to read the myths of Persephone and Daphne, both of which include vivid depictions of rape and sexual assault. As a survivor of sexual assault, the student described being triggered while reading such detailed accounts of rape throughout the work. However, the student said her professor focused on the beauty of the language and the splendor of the imagery when lecturing on the text. As a result, the student completely disengaged from the class discussion as a means of self-preservation. She did not feel safe in the class. When she approached her professor after class, the student said she was essentially dismissed, and her concerns were ignored.

Ovid's "Metamorphoses" is a fixture of Lit Hum, but like so many texts in the Western canon, it contains triggering and offensive material that marginalizes student identities in the classroom. These texts, wrought with histories and narratives of exclusion and oppression, can be difficult to read and discuss as a survivor, a person of color, or a student from a low-income background.

We don't know much about what happened between the student and the professor. Was there an assignment or further lectures on Persephone she wished out of? One would hope that when approached privately about such a matter, a professor would be sensitive to the student's concerns and offer alternative assignment options. But the fact that an occasional student might feel uncomfortable with certain material seems a strange reason to think no one should read and discuss it.

What's more—the hyperbolic language of trauma that's used! Sheesh. Apparently this discussion of Ovid was so threatening it was a matter of self-preservation to ignore it. If that's really true—if the mere discussion of rape causes this student to feel panicked and physically unsafe—then she needs help treating severe post-traumatic stress disorder, not a fucking trigger warning.

I say that with no judgment; being raped can obviously be traumatic enough to produce lingering psychological trauma. But that's what that level of reaction represents: psychological trauma. Which, while something professors should be sensitive to, shouldn't dictate the parameters of acceptable education for all students.

That the student physically stayed in the classroom for the discussion and talked to the professor immediately afterward, however, suggests she wasn't as struck with crippling post-traumatic terror as the op-ed makes it seem. Rather, the writers are merely engaging in the malapropism du jour, wherein words can be "violence" and challenging or uncomfortable thoughts make people "unsafe."