Interview with the Founder of Liberland, a Possible Libertarian Paradise

Pay whatever taxes you want and be left alone to live as you please. But no drugs allowed. 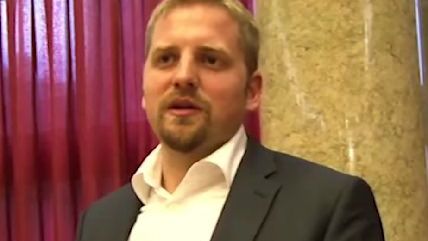 Like a lot of people in Europe, Czech activist Vit Jedlicka was dissatisfied with the state of affairs in his country.

Unlike a lot of people, for Jedlicka doing something meant founding a whole new country: Liberland.

"Everybody told me, 'You should start your own country to prove that your ideas of liberty work,'" he said in a phone interview. "So I did."

There's something charmingly maniacal about Liberland's self-proclaimed president. Despite giving more than 200 interviews in the last fortnight, he's chatty and his voice trills with a ha ha ha when something pleases him. But underneath this quaint exterior lies a Napoleonic self-assurance that he will build a second Dubai on a seven square kilometer patch of land on the west bank of the River Danube as it runs between Croatia and Serbia.

In order to have a country of his own, Jedlicka first needed to find a piece of what is known in international law as terra nullius, or "nobody's land." That might sound like a tall order, but according to Jedlicka it was as simple as checking the legal term's Wikipedia page.

"Anybody could do the same as we did," he said. "Unfortunately, this was one of the very last pieces of terra nullius on the earth."

Perhaps the most obvious point of comparison for his experiment would be the Kingdom of North Sudan. Described by the BBC as "800 square miles of arid desert," North Sudan was a triangle of terra nullius more than one hundred times the size of Liberland that had lain unclaimed by either Sudan or Egypt—whose borders sandwich it—for more than one hundred years. That was until U.S. citizen Jeremy Heaton decided to put his daughter into the history books as the 21st century's most spoiled brat. Then aged six, Emily Heaton had asked her father if one day she might be a princess. Apparently not one to refuse the girl, Heaton set off to discover a kingdom to claim as his own—turning young Emily's seventh birthday party into a coronation ceremony. We can only pity her first boyfriend.

Whereas North Sudan was spawned from a cauldron of poor parenting and a little girl's hunger for hereditary rule, Liberland was not born out of a desire for power. "I don't want to be involved in the government of Liberland," said Jedlicka. "My task is to introduce this constitution and, as you can see, there is no place for presidents in that constitution. So after I introduce the first general election in this country I would like to retire from the government of Liberland."

Jedlicka's plans for early retirement strengthen the suspicion that this might all just be an elaborate ploy to stick it to the EU, an institution he's made no secret of his distaste for. Certainly, he wouldn't be the first person to take advantage of the cartographic anomaly that is Croatia and Serbia's borders running parallel-yet-not-flush to throw two fingers up at Brussels. Dusan Djuric, from Serbia, told me how just a couple of years ago he led groups of tourists to, in his words, "get a chance to safely pee on EU territory from no-man's land." That's sort of what Jedlicka's doing: setting up a regulation-lite tax haven from which to pee on the EU's doorstep.

And yet he's clearly not the only one to feel that something's rotten in the modern nation state. On April 13, Jedlicka and his compatriots planted a yellow and black flag in the Serbo-Croatian no-man's land and gave birth to Liberland. A little over two weeks later they have already received more than 300,000 applications for citizenship. Impressive, considering the only permanent residents for the last thirty years have been wild pigs; doubly so, given that the Croatian border police are refusing to let anybody into Liberland. This is something that triggers a ha ha ha from Jedlicka.

"That's great, that's great," he said. "We are thankful to the Croatian police for being the guardians of our borders, we don't have the funds for it yet. So everybody's invited, but they have to come with a boat."

Publicly, the Croatian government is dismissing Liberland as a bad joke—a "virtual quip" unworthy of comment, is the foreign ministry's official line. In private, however, Jedlicka insisted Zagreb is taking the issue very seriously indeed. Jedlicka claimed to have insider knowledge regarding an extraordinary meeting held last Sunday in the Croation government to discuss options for dealing with the country's tiny new neighbor. His insider source? Wannabe citizens present at the meeting, he said.

Whether the meetings are real or not, Croatia has been remarkably reluctant to claim Liberland for itself. Jedlicka claimed his presidential assistant is thrashing the issue out with an assistant to the Croatian president. Despite Zagreb's frostiness, Liberland's president is confident that "we will be able to set up good relations no matter what they do."

The Serbian foreign ministry was less equivocal. Its stance is that Liberland's formation was "a frivolous act which needs no further comment."

But that is apparently not a position shared across the Serbian government. When I spoke with Jedlicka, he had just come out of a meeting with the Deputy Speaker of the Serbian National Assembly, Vladimir Marinkovic. In this meeting, Jedlicka claimed Marinkovic endorsed Liberland's sovereignty.

"Unfortunately," he said, "that was right after AFP [Agence France Presse] left, so it was not on the AFP camera, but I will try to get them to come back so we can film this endorsement again for AFP so you don't have to take it from my Facebook profile." At the time of writing, no such video had been released by AFP.

Jedlicka claimed Marinkovic even expressed an interest in travelling to Liberland for its first 'Liberty Day' party on May 1. What does a Liberty Day party look like, you ask? "It's going to be a big party," said Jedlicka. "We got Budweiser, the Czech national beer, supporting us. They told me they want to be the national beer of Liberland, so they will provide us with lots of beer. And we will raise the flag, we will repair the building that is there. Now the media laughs that it is broken down, so we will fix that building and raise the flag. Have a little party. And we will start a permanent settlement."

Liberland's one permanent structure has been a source of amusement to many. Bushes obscure any doors or ground floor windows that might exist and trees appear to be growing right through the center of the building. Jedlicka has high hopes for Liberland, though.

"I think over half a million could fit there if you do the same project as Dubai," he said. "And we do have people who built Dubai who have applied for citizenship and they want to build the same thing in Liberland. So I think we can make the place really nice, really a place of fully happy people."

There is a wonderful, childlike excitement in Jedlicka's voice when he talks about his plans. Mention electricity and he blurts out a memo to himself like a state-builder savant: "That's a good point, I need to get more solar panels."

I suggested to Jedlicka that he could be described as a modern-day free-market Moses. He replied: "Some people say that, some people want to make fun. I just wanted to be practical and introduce competition into the market of the states and this seemed to be the… easiest way. Now everyone's talking in the free market movement about competition but nobody really introduced anything to make this competition happen. You know, everybody tried to change their state for the better. I'm offering a superior product for a very low price, you don't even have to pay for it if you don't want to."

It's an enticing offer if you share Jedlicka's libertarian views: pay as many or as few taxes as you desire and be left alone to live as you please. That said, the new nation isn't fully libertarian: Liberland has a strict anti-drug policy since "you lose your free will when you start using them," according to Jedlicka.

Note: Jedlicka was arrested by Croatian police for trespassing on Saturday.