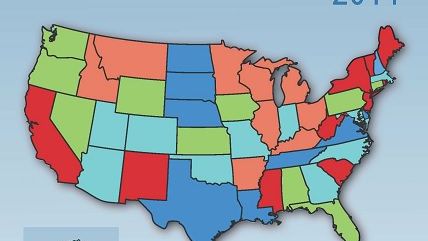 Increases in overall freedom correlate with larger total market income growth-that is, growth in earned income, as opposed to government transfers, and excluding capital gains. So concluded a study that compared levels of "freedom" in the various American states, as measured by the Economic Freedom of North America index from the Fraser Institute.

The study, conducted by the Mississippi State University economist Travis Wiseman, was published by the National Bureau of Economic Research in November 2014. All things being equal, it concluded, a one-point increase on the seven-point freedom index is associated with an $8,156 increase in real average market incomes.

Wiseman also reported that higher freedom index scores are linked to larger average market income growth for earners in the bottom 90 percent relative to those in the top 10 percent. Wiseman speculates that this might be because more freedom from "takings and discriminatory taxes" signifies less "crony capitalism"-that is, less shifting of money to benefit those with the best political connections. That in turn decreases the incomes of the richest tenth of Americans.