California Drought a Shortage of Water or Common Sense? 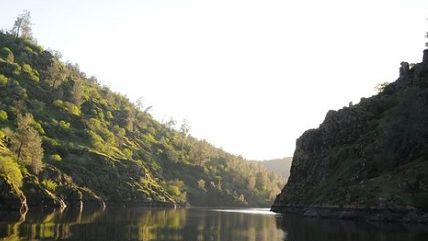 Californians seem to have remarkably good attitudes about the sacrifices they'll make as the drought heads into its fourth year. Based on polls, they even are supportive of crackdowns on excessive water use, which may explain Gov. Jerry Brown's recent call for $500 fines for those who over-water their lawns or take excessively long showers.

But how tolerant will the public remain about slashing water use once they realize how state and federal officials are using — some would say squandering — the state's dwindling resources?

On Tuesday, I attended a packed meeting at the Oakdale Irrigation District east of Modesto, where farmers and residents questioned a plan to lower water levels at the massive New Melones Reservoir — and possibly drain Lake Tulloch, a small lake surrounded by homes in the Sierra foothills.

Here's the rub: The water isn't being released to benefit farms and homes. It is being released to help coax a handful of steelhead trout to swim to the ocean. A "pulse flow" was scheduled for Wednesday, but has been delayed amid the dispute. But large releases are imminent.

When one official said he anticipated the "need" to release more water, a board member snapped back: "The need or the want? What will be the flow for those nine steelhead?" That's dark humor given the small number of fish that would potentially benefit from the planned releases.

"It's not just about depleting the water supply for people and pitting people against fish," said Andrea Fuller, a biologist and co-owner of Fishbio, which counts fish on the Stanislaus River for the irrigation district. "They (the government agencies) are putting in jeopardy the very fish they are trying to save." That's because the agencies want to release so much water that it is depleting the cold, deeper water the fish thrive in. Yet in meetings with officials, she's found it hard to have a logical discussion.

"Fish and people, people and fish," said Oakdale Irrigation District general manager Steve Knell, during the board meeting. In his view, that's a false dichotomy. Both can be served – but he said there's a need for "off ramps" during times of crisis so that water can be diverted to the highest needs, namely people and the economy. (Environmentalists argue that even though the numbers of fish are small, it's an indicator of bigger ecological problems.)

In March, the federal agencies had negotiated a compromise with the irrigation districts. Water releases would continue and the districts agree to give up a significant amount of their allotment. In exchange, the feds would allow New Melones to fall to a lower level than they preferred given they want more water available in the fall to boost seasonal salmon runs. In the meantime everyone would do what signs on nearby farms say: "Pray for rain."

But the Bureau of Reclamation had been backing away. Then the environmentalist-oriented State Water Resources Control Board released an order critical of the deal. It wants more water flows now to benefit the Delta – and a much higher water level in the fall for the salmon. That means more water now and later, all of which must come from the irrigation districts and their customers. This set up the first round of civil disobedience.

The feds last week released water from New Melones. It feeds into Tulloch, which the irrigation districts control. The districts would not release that water. "What if we told them to go to hell?" asked one Oakdale Irrigation District board member. That's the 100,000 acre-foot question now at issue. A deal was worked out that reduced the tensions, but it still includes large water releases to benefit the fish even as the state struggles with drought.

"The policy is breathtakingly stupid at both the state and federal levels and is being administered by ideological zealots who can't be reasoned with," said U.S. Rep. Tom McClintock, a Republican who represents the district. "I was beating the drums on this last year and nobody paid any attention." That's because no one believed government policy could be so misbegotten.

Now we have sizable communities that eventually might open the spigots and have no water, to help a fish so common I had it for dinner this week. When will Californians start noticing?