The 50th anniversary of the Landmarks Act is an opportunity to mourn all the invisible buildings that will never exist because of a misguided law. 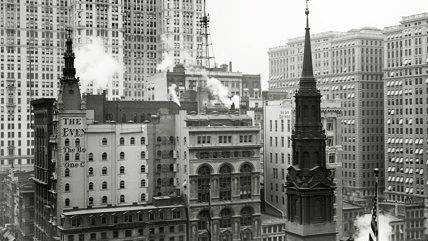 Once upon a time New York City's builders blithely turned spectacular monuments into dust. Henry James complained about Manhattan's "restless renewals," but in the old days nostalgia was for writers and poets. Developers were preoccupied with building the future.

This ethos of creative destruction allowed New York to become the world's preeminent city. And then on April 19, 1965, which is fifty years ago this Sunday, Mayor Robert F. Wagner signed the Landmarks Preservation Act. The law made it illegal to destroy any structure that the city's planning elite deem too important not to save. Today almost a third of the buildings in Manhattan, and more than 33,000 structures citywide, may as well be encased in a life-sized historical diorama.

To illustrate the damage done by this law, let's imagine that the Landmarks Act had been passed not in 1965, but in 1865, when the spire of Trinity Church still towered over Lower Manhattan. Modern New York wouldn't exist.