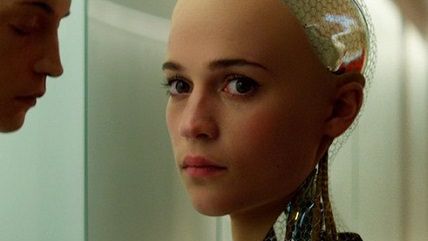 Alex Garland's Ex Machina probes the eerie menace of artificial intelligence and makes it seem even eerier. The picture's mood is hooded and unsettling, and its subject—the A.I. future that's hurtling toward us ever more rapidly—exudes a slow, screw-tightening horror that creeps off the screen and settles into your head.

The story is naturally set in computer world. Caleb Smith (Domhnall Gleeson), a young programmer with Bluebook, the world's most powerful search engine, is summoned to the home of his billionaire boss, the shadowy Nathan Bateman (Oscar Isaac). His remote estate is a temple of barren luxury, where Nathan—a strange man, both chummy and sinister—is attended only by a mysterious, unspeaking Japanese woman named Kyoko (Sonoya Mizuno). There's a research lab on the premises, and it turns out that Nathan has been very busy in it.

The inscrutable tech mogul tells Caleb that he has created a true artificial intelligence, or at least he thinks so.