Politics has become more democratized and that's a great thing. 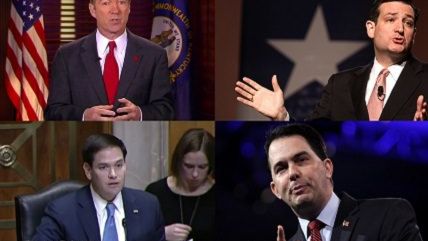 Sen. Rand Paul's announcement today that he will seek the Republican Party's nomination for president punctuates a very real paradigm shift in the way the Grand Old Party will select its candidates for higher office.

For most of my adult life, Republican poobahs have decided for the rest of us, typically favoring the dusty candidate that has been standing in queue the longest. Think John McCain or Mitt Romney. Like a nightmare reinterpretation of the Bill Murray movie Groundhog Day, it seems that the GOP keeps nominating Bob Dole again and again, only to wake up the next morning to discover that their guy lost the election.

This trend will likely, finally, be disrupted in 2016. Paul's candidacy declaration was preceded by one from Sen. Ted Cruz of Texas on March 23, and will likely be followed by another from Sen. Marco Rubio of Florida. These candidates are certainly not all cut from the same cloth, but they have one common characteristic. Just a few years ago, the Republican establishment didn't want them.

In 2009, the National Republican Senatorial Committee famously endorsed establishment favorites Trey Grayson over Paul, and (now Democrat) Charlie Crist over Rubio in the primaries. Cruz was similarly savaged by establishment favorite David Dewhurst in the 2012 Texas GOP primary, but ultimately triumphed despite a four-to-one spending disadvantage.

Indeed, the potential field of presidential candidates for 2016 has been almost wholly repopulated with younger, more charismatic, more authentic conservatives. Consider Wisconsin Gov. Scott Walker, another interesting potential contender for the Republican nomination. He would not have won in 2010, or survived ongoing attempts by public employees unions to oust him, were it not for the engagement of grass-roots activists, including local tea party and liberty organizations, who have cropped up across the state since 2008.

And that's the point. Politics in America has become more democratized—and tumultuous—because of multiple sources of information online and ubiquitous social-media platforms that allow for easier self-organization. Across America, moms with home-built Facebook communities have a deeper reach than can be found at the local county GOP headquarters. Activists no longer depend on the Republican National Committee to tell them what to think or say, or who their preferred candidate might be. This political disintermediation is certainly disruptive, but Republicans have long claimed an unbending faith in consumer choice and robust competition.

Oddly, GOP insiders maintain their belief that hotly contested primaries are a bad thing, and seek to game the rules accordingly."In reality, winning a nomination fight elevates the stature of the victor," according to Dartmouth political scientist Brendan Nyhan. "[H]e or she can also benefit from the organizational efforts required to win a tough primary fight." Nyhan cites Presidents Bill Clinton and Barack Obama as examples.

For his part, Paul has been appealing to a growing libertarian streak in the American electorate, particularly among young people. His unconventional work on criminal justice reform represents one of the few opportunities for genuine bipartisan cooperation in gridlocked Washington. His push for fixes to civil-asset forfeiture laws and federal mandatory minimum sentencing for nonviolent offenders is a good thing for the Republican brand. (Notably, other "insurgent" senators like Cruz and Sen. Mike Lee of Utah have also been leaders on these issues.)

The advantages that historically favored "the next guy in line," like superior name recognition, key endorsements from party elites and well-established donor networks, are quickly dissipating. My prediction: This time, the Republican nomination will not be a coronation, and the nominee's last name will not be Bush.

Matt Kibbe is president and chief community organizer at the nonprofit Free the People.